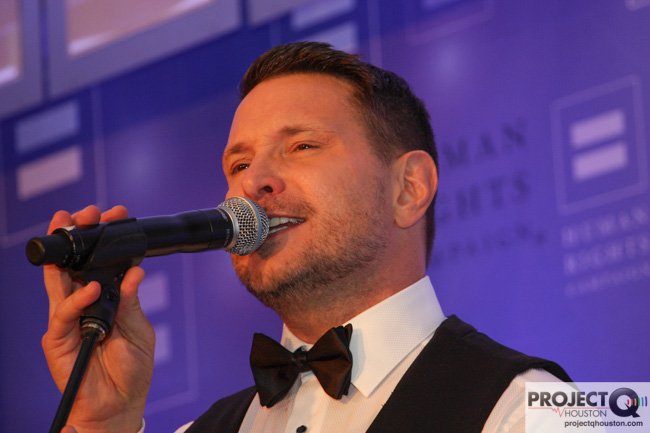 Gay Houston took an upscale break from fighting anti-LGBT efforts on Saturday to toast equality, raise funds and celebrate with the help of a basketball star and Grammy-nominated country singer.

A crowd of nearly 1,000 people filled a Westin Galleria ballroom for the HRC Houston 18th Annual Gala, which organizers announced raised more than $200,000 during the evening thanks to a silent auction and a live auction and later pledge drive hosted by lesbian comedian Dana Goldberg.

The gala celebrated LGBT milestones – including what could be a decision in June from the U.S. Supreme Court legalizing gay marriage – but came with a warning from HRC President Chad Griffin that there is more work to be done.

“Marriage isn’t the end of that long and winding road towards full equality. Beyond marriage, there are enormous battles ahead of us,” Griffin said. “Even securing marriage equality in all 50 states, that doesn’t guarantee our families will be treated equally under the law.”

Griffin warned that controversies over “religious freedom” legislation in several states – including Texas, Georgia, Indiana and Arkansas – showed that even with a gay marriage victory this summer, anti-gay activists are continuing their work. In Texas, at least 20 anti-gay bills have been filed in the current legislative session.

“We are in the fight of our lives. From Indiana-style religious freedom bills to legislation attacking the transgender community, our adversaries are better organized and better funded than we’ve seen them in more than a decade,” Griffin added.

Mayor Annise Parker noted that the dinner will be the last she attends as the city’s openly gay chief executive. Her term ends this year and at least two candidates to replace her – state Rep. Sylvester Turner and Harris County Sheriff Adrian Garcia – attended Saturday’s event.

“This is the last I will be able to attend as mayor of Houston,” Parker said to hisses from the crowd. “Yeah, I’m going to miss it too.” 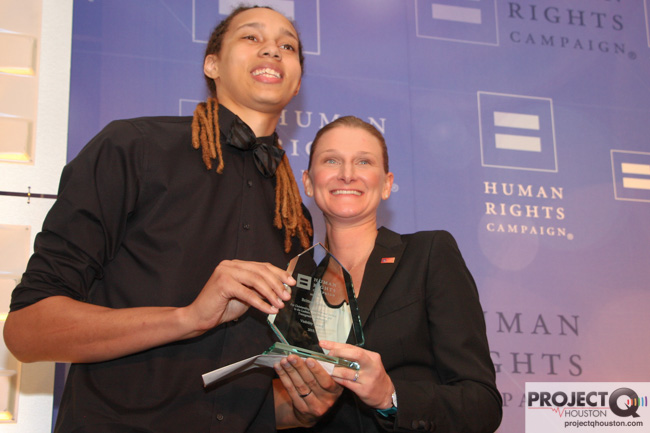 ‘I never would have dreamed it’

The event included appearances by country singer Ty Herndon (top photo), who came out as gay last year after an intimate performance at gay Houston bar Neon Boots, and WNBA superstar Brittney Griner (second photo). The native Houstonian announced her engagement to fellow WNBA player Glory Johnson in August, just one many reasons why we love her. Parker said seeing Herndon and Griner thrive as out gay celebrities was something she couldn’t imagine when she started her LGBT activism years ago.

“I’ve been doing this work for 40 years,” Parker said. “I attended my first political organizing event for the GLBT community in 1975. I’ve been doing it for a very long time. Frankly, a Ty Herndon and a Britney Griner, I never would have dreamed it but it makes those 40 years all worth while.”

“What an absolute honor to be standing up here tonight – an out, proud, gay man in the state of Texas,” Herndon said (watch below).