Gay hand holding rally on for Saturday in Atlanta 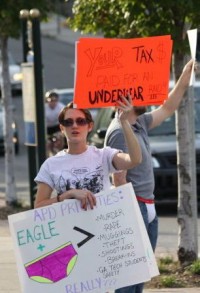 After a protest in your underwear, same-sex hand holding in Piedmont Park might seem a little bit of a let down. But citizen provocateur Laura Gentle is at it again and needs your gay hand holding self on Saturday.

Gentle (photo) surfaced in the wake of the police raid on the Atlanta Eagle last September. She helped organize events to harness the public outrage that followed the event, including protests on Sept. 13 and Sept. 19, and an “Underwear Protest” in Midtown on Oct. 21.

Now, she’s organizing an Atlanta event for A Day in Hand, an international effort to inspire LGBT couples to hold hands in public. It comes seven months after gay folks puckered up and protested in Piedmont. But really, don’t gay boys tend to kiss first and hold hands later?

Gentle, though, makes it easy by asking just four things of you to take part on Saturday: Step outside, hold hands, live your love — or if you’re running short on that, a friendship, and take a picture.

The event kicks off at 12 p.m. on the steps leading to the athletic fields. Read the full event listing or the Facebook invite.