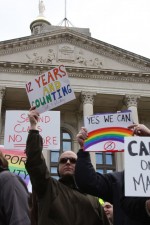 A trio of gay and gay-friendly groups are joining together Wednesday for “By the People Lobby Day” at the Gold Dome.

The groups — Georgia Equality, MEGA Family Project and the ACLU of Georgia — want to rally their progressive supporters to the State Capitol this week to talk with their own legislators about hate crimes bills and other gay-friendly legislation.

In an advisory to supporters last week, Georgia Equality urged supporters to tell their lawmakers that the state is one of just five without hate crime legislation. The pitch for Wednesday’s lobby day also includes mention of a March 8 attack in Midtown that is being investigated by police as a possible hate crime.

We want our lawmakers to know that the LGBT community is actively watching what is going on under the Gold Dome, and bigotry and discrimination should not be tolerated in Georgia.

The lobby day is the second this session for Georgia Equality, which also urged supporters to meet with their lawmakers in late February.

But the trouble is that legislators last week passed Crossover Day without approving any hate crimes legislation (or any other gay-friendly legislation). That means lobby all you want on Wednesday, but passing either of the two hate crimes proposal this session is next to impossible.

Progressives in Georgia, though, are a hopeful bunch. So show up at 9 a.m. in room 306 of the Paul Coverdell Legislative Office Building downtown and see what you can do.