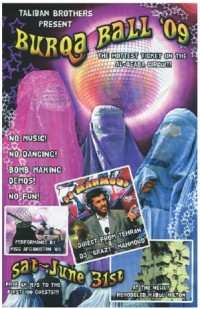 But Gaydar’s publisher says the ad — a fake promotion for “Burqa Ball ’09” — is an attempt to call attention to those who pervert Islam and mistreat women.

The criticism of the advertisement, which was published several weeks ago, came in an Aug. 10 letter from Trikone Atlanta, a social and support group for LGBT people of South Asian heritage. Six other groups so-signed the letter: AIDS Alliance for Faith & Health, Al Fatiha Foundation, Georgia Rural Urban Summit, Queer Progressive Agenda, Raksha and ZAMI.

The groups says the ad is sexist, degrades women, implies that Muslim people are terrorists and insensitive to “the hundreds of thousands of people the U.S. military has killed in Iraq and Afghanistan.”

“It is imperative that we as oppressed queer people take care not to celebrate ourselves by contributing to the oppression of others, and even parts of our own communities,” the groups say in the letter. “Given the profound offense that the mass publication and circulation of this advertisement has caused among Atlanta Muslims, who are already being unjustly profiled as “terrorists,” we demand that Gaydar publicly apologize, in your magazine, for printing this advertisement and refrain from publishing culturally insensitive material in the future.”

Matt Neumann, Gaydar’s publisher, says the magazine has published a handful of satirical ads in the past, including “Burqa Ball ’09,” that are designed to grab people’s attention but not offend. Neumann, who was traveling Tuesday, said he had not yet read the letter from Trikone, but offered an apology if its members were offended.

“The ad is a mockery of the practices of people who call themselves Islamic, not of the people itself,” Neumann says. “Islam is a religion of peace and promotes harmony. We are calling attention to the perversion of the religion and making a mockery of the ridiculous way in which women are treated in the Middle East.”

“This is a satire making fun of those that pervert Islam, not those that practice it. If it offends them, I apologize. It is just satire and if they are offended by it, apologies to them,” he adds.

Neumann says the ad should be taken in the same sense that the moviegoers see “Bruno,” the story of a fictional gay Austrian fashion reporter who pranks often unsuspecting straight characters. He also drew comparisons to Mary Edith Pitts, the popular drag personality whose costumes portray her as an overweight and often offensive performer.

“I am fat and Mary Edith Pitts does a mockery of a fat person. I’m not offended,” Neumann says.