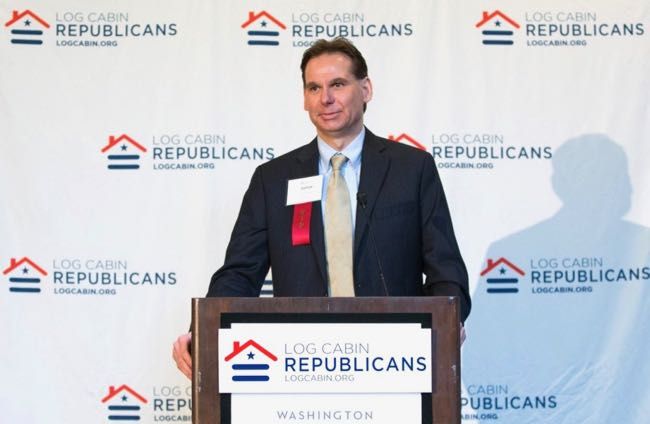 The Georgia Log Cabin Republicans said the “liberal bullying” of Atlanta-based Chick-fil-A must end, and the group’s leader said that LGBTQ equality in the U.S. has largely been accomplished.

The comments from the organization and its president, Jamie Ensley, came in the wake of criticism of Twitter CEO Jack Dorsey, who tweeted about eating at the chain in Los Angeles on June 9. The tweet came during Pride month and critics pounced, prompting Dorsey to apologize.

Chick-fil-A – one of the largest fast-food chains by sales in the U.S. – came under fire in 2011 when IRS filings showed their charitable foundation pumped millions into anti-LGBTQ groups. Company CEO Dan Cathy’s vocal opposition to gay marriage followed. The company later scaled back most of its funding to such groups, but a report last year showed that such donations continue, including a $200,000 gift to an anti-LGBTQ youth home in Georgia.

In the latest flap, some LGBTQ activists warned against eating at Chick-fil-A, “if you really love LGBTQ people.”

On Sunday, Georgia LCR and Ensley stepped into the fray with a post on the group’s Facebook page saying, “The Georgia Log Cabin Republicans SUPPORT Atlanta based Chick-fil-A and demands an end to liberal bullying. Chick-fil-A has always been welcoming and has never refused service to the LGBT community.”

A day later, on June 25, Ensley defended his comments in an interview with the AJC's Political Insider and went a step further, adding that “the war is over” in the fight for LGBTQ equality.

Georgia LCR has 150 dues-paying members, Ensley said. He has served as chair of the Log Cabin National Board and as campaign treasurer for Atlanta mayoral candidate Mary Norwood.

Ensley elaborated on his comments in an interview with Project Q Atlanta. He said he was motivated to proclaim the group’s support for Chick-fil-A after the Dorsey controversy, but also in the wake of White House Press Secretary Sarah Huckabee Sanders being turned away from a Virginia restaurant and U.S. Rep Maxine Waters calling on supporters to publicly confront members of the Trump administration.

“Chick-fil-A has only been kind and welcoming to the LGBTQ community even when protestors attacked their restaurants,” Ensley said. “Most Republicans including myself are outraged by the hypocrisy, intolerance and bullying by the liberal far left and enough is enough.”

When asked about Cathy’s opposition to gay marriage, Ensley said the Supreme Court has decided the issue and “it’s time to move on.”

As to the company funding anti-LGBTQ groups, he pointed to other parties that may do the same.

“Chick-fil-A is a privately held company and not publicly traded, but there are large stockholders or hedge fund managers who own huge blocks of stocks in major corporations who also made donations to Christian charities that may be perceived as anti-gay as well,” he said. “In addition, In-N-Out Burger is also a privately-held Christian company, but the biased liberal left continues to unfairly attack a company because it’s located in the South.

“The Georgia Log Cabin Republicans are proud to be the first LGBTQ organization to support a buycott of Atlanta-based Chick-fil-A,” he added.

Ensley is correct in that In-N-Out Burger’s owners are Christian, and the business is known to print Bible verses on its packaging. However, they have not publicly stated their views on gay marriage and the company’s charitable arm has not been found to donate to anti-LGBTQ causes.

“Mission accomplished on the war for LGBTQ equality in America with only a few battles remaining for full equality,” Ensley said. “The keystones of our movement have been laid, with employment and housing equality being one of the few major battles left. In 2018, a majority of major Fortune 500 corporations and mid-sized companies have sexual orientation and gender identity employment policies in place. A majority of LGBTQ Americans can live their lives normally in America mostly without discrimination.”