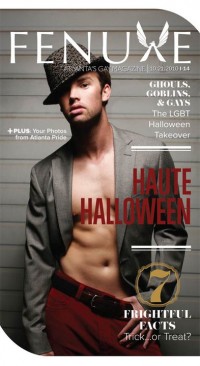 If you’re a size queen and a fan of Fenuxe magazine, you’re probably walking around with a smile on your face these days. Two inches will do that to a gay.

That’s because the six-month-old publication is growing up – literally. The Oct. 21, 60-page issue — the magazine’s 14th — hit the streets last week with a little more size. It still measures in at six inches wide, but now tops out at about 11 inches tall – nearly two inches taller than its past format. That’s worth at least three or four inches in Manhunt parlance.

Why does it matter? It’s another move to distinguish the upscale glossy in Atlanta’s LGBT print media scene. (Click on the image for a larger view.)

Fenuxe’s previous size matched that of David magazine. The publications enjoy different niches of the gay audience, but Fenuxe has recently been expanding its roster of bars and clubs as advertisers, encroaching on a staple of David’s base.

“The larger format allows us to be more creative with our layouts, producing even more dynamic content for our readers and additional space for our advertisers to convey their message,” says Fenuxe Editor William Duffee-Braun. “We are so thrilled that the community has embraced it.”