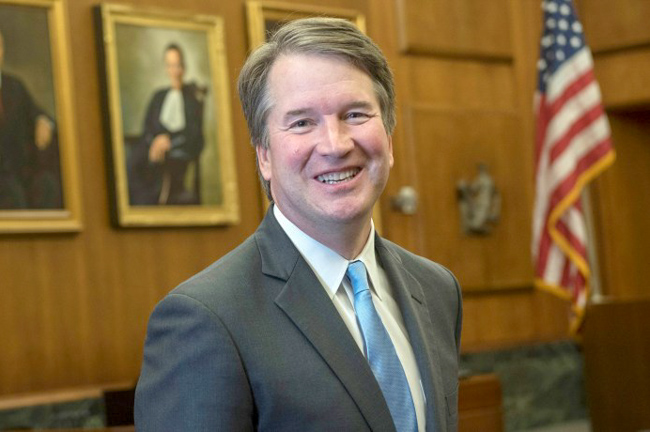 The group made the announcement on Monday shortly after President Donald Trump announced his pick of Kavanaugh (top photo) to succeed the retiring Justice Anthony Kennedy.

“Georgia Log Cabin Republicans believe marriage equality is here to stay and we intend to fully support Judge Kavanaugh,” the group said in a statement. “We look forward to hearing Kavanaugh discuss pertinent issues facing LGBT Americans today during his confirmation hearings. Our hope is that Georgia's US Senators Isakson [R-GA] and Perdue [R-GA] will ultimately vote to confirm Kavanaugh.”

Sens. Isakson and Perdue issued press releases shortly after Trump’s announcement confirming their support. Isakson said Kavanaugh’s record “indicates that he shares a strong commitment to the Constitution and the rule of law,” and Perdue called him “an outstanding nominee” who “has shown a commitment to upholding our country’s Constitution.”

“In nominating Brett Kavanaugh, Donald Trump has followed through on his threat to nominate a justice who would undermine LGBTQ equality, women’s reproductive rights and affordable healthcare,” HRC President Chad Griffin said.

“Now, the Senate has a responsibility to fulfill its constitutional duty, serve as a check on this reckless president and reject Brett Kavanaugh’s nomination. This nominee was hand-picked by anti-LGBTQ, anti-choice groups in an explicit effort to undermine equality — and the prospect of a Justice Kavanaugh threatens to erode our nation’s civil rights laws, block transgender troops from bravely serving this nation and allow a license to discriminate against LGBTQ people in every aspect of American life,” he added.

Last month, Georgia LCR said the “liberal bullying” of Chick-fil-A – which has funded anti-LGBTQ organizations – must stop. The group's president, Jamie Ensley, also said “the war is over” in the fight for LGBTQ equality. Also in June, the group's ethics complaint against Mayor Keisha Lance Bottoms was rejected by the Georgia Ethics Commission.