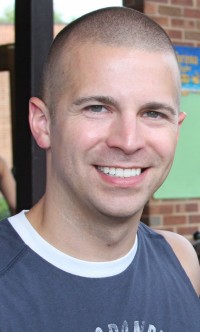 Among the more than 9,000 LGBT athletes and artists competing in the Gay Games this week in Cologne are about two-dozen Atlantans, including swimmer Matt Holder.

The 32-year-old swims with the Atlanta Rainbow Trout and is often spotted at fundraising events for the city’s other LGBT sports teams, but he didn’t participate in team sports under after high school and college. We caught up with Holder before he left for the Gay Games to discuss the sporting event and taking part in the water polo competition.

Project Q Atlanta: What’s the most challenging part of your sport?
Holder: Water polo is a vigorous and often aggressive sport, so most people think that swimming and treading are the hardest parts, but I was a swimmer before I was a polo player.

Water polo is the first team sport I’ve ever played, and I never really appreciated the need — and the challenge — of knowing where everyone is. I don’t think this is a skill that most people develop over night, and for me it’s definitely been a long learning curve and one that I know I’m still working on.

How significant are the Gay Games to you?
Being on gay sports teams has been a tremendous positive influence in my life. With so much of gay life dominated by bars, clubs, and now the Internet, gay sports provide a more personal alternative to meet and interact with other gays and lesbians.

The Games are a big, fun, boisterous representation of gay sports, but the gay sport organizations in each city are more important. The Games remind me to appreciate the impact of our local gay sport communities.