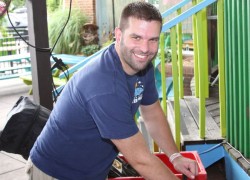 Among the more than 9,000 LGBT athletes and artists competing in the Gay Games this week in Cologne are about two-dozen Atlantans, including water polo player S. Jeremy Koziol.

The 33-year-old plays with the Hotlanta Soccer Association and is on the roster of the Atlanta Rainbow Trout and its water polo team. We caught up with Koziol (photo) before he left for the Gay Games to discuss gay jocks and his plans to play goalie for the Trout’s water polo squad.

Project Q Atlanta: What’s the most challenging part of your sport?
Koziol: For any sport, the biggest challenge is staying focused for the entire length of the game/match/routine. The physical aspect can be trained for and prepared for, but with the mental aspect, the focus is so more complicated.

What does it mean to you to take part in the Gay Games?
The Gay Games still mean a lot to me personally. This will only be my second competition and I hope to be able to do more.

Before coming out, did you ever struggle over being and being an athlete?
My struggle was just about being gay, not necessarily with being gay and an athlete. I was also a musician, which may have made things a lot easier for me. I don’t really remember people being dissed for being gay, more just for being bad or missing plays. It comes down to the societal acceptance to use gay as mocking for bad.

Why do you think that sports seems like the last place that it’s OK to be gay?
It really goes back to society as a whole. Across our society there are few “celebrity” role models, and less so when you go into the more “masculine” based heroes. It’s OK for an actor — to an extent, few still come out in the prime of their career, they wait until later — but for an athlete the stereotype is still very strong that a person meets society’s norms. The few athletes that have come out in their prime are already in a sport considered “gay.” Which then begs the question, do gay athletes push themselves into the sports already considered that way or is just that the sport lends itself to be more accepting?

Team sports are always going to be a bigger problem because of group think and a majority rules type of situation. The Gay games definitely works to burst stereotypes. It introduces the idea to the public that it is possible to be both gay and a competitive athlete.

Have you ever dealt with people who think that gay equals bad at sports?
I have experienced that gay equals bad at sports. It was an entertaining game, especially since we wound up winning by several goals after the team mouthed off at us. It was the first time an entire team had the attitude that we were going to be bad and hasn’t happened since. After we won that game the rest of the teams in the league gave us a lot more respect.

Occasionally there are one or two people that say things, but they are isolated and more used to try and rattle people, not necessarily because we are gay. I hate that “fag” is still a way to mock someone, but ultimately that rests on our own community to stop using it on each other and being more willing to say to someone that it isn’t cool to mock someone as “gay” whether they are or are not.