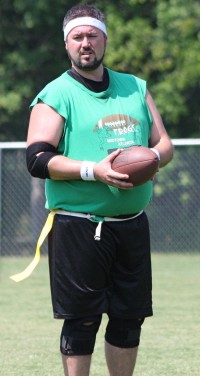 Among the more than 9,000 LGBT athletes and artists who competed in the Gay Games last week in Cologne were about two-dozen Atlantans, including bowler Chip Pecchio.

The 37-year-old quarterbacks a team in the National Flag Football League of Atlanta and is a member of the Rainbow Match Point bowling league. Pecchio (photo) attended the Gay Games in bowling, and we caught up with him to discuss the competition before he left for Cologne.

Project Q Atlanta: How big of a deal are the Gay Games?
Pecchio: I went to the Gay Games in 2006 in Chicago. That was also the year I came out to my family and close friends from high school. Chicago ended up being an emotional and uplifting experience as a result. I competed in darts then and won a Silver Medal. Being a part of something that gives you pride in who you are and allows you to connect with others like you is an experience that everyone should have. It is always amazing when a city hosts the event and you feel so welcome.

Describe the camaraderie among athletes who are gay?
Many people who come deal with intolerance at home, and it is a chance for them to know that there is acceptance in this world. We share a bond that lends itself to camaraderie despite the competition.

Why do sports seems like the last place that it’s OK to be gay?
Locker room sports are probably the most difficult to be gay due to those straights who think they will be hit on. Gays have just as much testosterone flowing as anyone else, so everyone needs to get over it. Events like the Gay Games show that gays come in all shapes, sizes, ethnicities, and personalities.

Have you ever faced people who are surprised that gays do play sports competitively?
Not really. If you can prove it on the field, the good people in this world doesn’t care who you love.