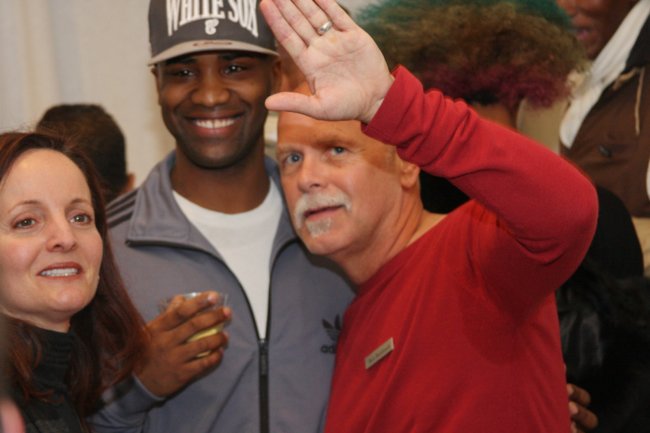 The best part of the popular “Body & Soul” show at gay-owned pb&j gallery is seeing, touching and talking to the models at the opening. Viewing them in photos with liquid latex poured on their bodies isn’t bad, either.

The annual exhibit with a flair for the risqué opens on Saturday with the works of gallery owner Bob Burkhardt (photo) and three other artists: Cayce Callaway, Trevor Green and Li Su. Like Burkhardt, Green and Su are gay and don’t spare the flesh in their work. In its fourth year, we’d expect nothing less from “Body & Soul,” which runs at the Kirkwood gallery until March 22.

“There is an inherent beauty in the human form,” Burkhardt says. “The photos feature models of both sexes and various races. This is work that can easily be appreciated by most viewers and it is something you will not see at most Atlanta galleries. While the work features nudity, is always presented with taste and discretion. It is a diverse and thought-provoking exhibition.”

There’s booze and snacks to nosh on while you’re enjoying the celebration of the human form. But the show attracts a packed crowd, so Burkhardt warns that you should arrive early. There’s no cover and plenty of free parking.

For his work, the self-taught Green painted his models with makeup and liquid latex before shooting photos of them on backgrounds with similar colors. Su uses a mix of skin and muscle to capture the maturity and vulnerability in men.

“I want to explore their loves, their fears, their hopes, their scars and all their experiences through the vicissitudes of life,” Su says. “When you face a nude male body, you are approaching the inner side of a complex personality.”

Sneak a peek at some of the photos on display ahead of the opening on Saturday from 7 p.m. to 10 p.m. And then check out photos from “Body & Soul” last year, 2011 and 2010. You’ll see plenty of reasons that it’s one of the Best gay things to do in Atlanta this weekend.