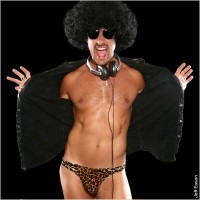 Studly gay funnyman Greg Scarnaci (photo) gives us 12 inches of fun right smack in the spot where we want it – our funnybone. The cult video phenom’s first album confirms it: he’s “the gay Weird Al Yankovic.”

After years of working as an actor and posting parody music videos and commercials online, Scarnici’s debut album, “12 Inch Freak,” came out on Tuesday. Filled with bawdy tracks and funny interludes, “12 Inch Freak” is a hysterical introduction to Scarnici as a recording artist.

He made time to speak with us about the album, recording parodies of songs, and his undying adoration for Molly Shannon.

Project Q Atlanta: Describe your music for those who haven’t heard about it.
Greg Scarnici: It’s comedic dance music. It’s sort of a concept album, which makes no sense in this day and age. I wanted to take all the different kinds of dance music and poke fun at the whole genre, so there’s slow jams, electro, new wave, disco and Euro tracks on the album.

What’s it been like to record “12 Inch Freak”?
It came about haphazardly. I used to spend $300 to go to a studio to record my parody songs, and an engineer told me for $500, I could do it in my bedroom. I bought the equipment, and I quickly had four songs done. It was exciting because it was the first time I had done anything like this. I would go into the bedroom and record, and then I’d go out and get my boyfriend and say “Come listen to this,” and he would say “But you’ve just been in there for a little while!” It was great. 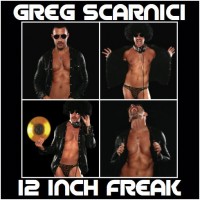 What is your favorite song on the album?
They’re all unique and retarded in their own way. If I had to pick a favorite, I like “Cooler Than You,” which is like an LCD-sound system rip-off of the indie dance scene. I think I captured the sound I was going for. From a humor standpoint, I also love “I Wanna…” because it’s just ridiculous and funny.

Wait a minute! I just remembered my real favorite. I have a deep house track “Ooh… Yeah…” about a love affair gone awry, and the guy I got to play the girl is hilarious, so that’s definitely my favorite now that I think about it.

You’ve been on “SNL,” “Anderson Cooper,” “Best Week Ever,” and you’ve acted on “30 Rock.” Will we see more of you on TV?
Sure. I’m always auditioning. I just auditioned for “30 Rock” again, so hopefully I’ll be on the show again. It’s such a crazy industry, so you never know what’s going to happen. I’m always pursuing TV, movie, and video projects all the time. I just throw it out there and see what happens.

The commercial parodies on your website are hilarious. How long does it take to come up with those?
The ideas come to me in a flash, and then it will take me a day to get the concept down, and then a week or two to get the concept where it’s done. I usually shoot them in four to six hours and then edit them in a day. The key concept is to wait before shooting because all of the ideas that come to me in the writing process make it better, so it’s not a good idea to rush in, even if you think it is the best idea ever.

When you do a parody, what does it take to get the rights from the original artists and songwriters?
Well, that’s the problem I ran into. When I first started, I would just do them for fun and threw them online, and when they started getting millions of hits, I got hit with copyright claims. They didn’t like what I was doing with the songs or how I was portraying the video. So now I write my own versions, which are legally sound. In terms of the music, you have to use a sound-alike, so it’s the same song but it’s in a different key or a version where the music is slightly off in some way.

What are your live shows like?
When I perform live, it’s mainly sketch comedy. I just did a show with a drag queen named Sherry Vine. We did a take-off on Sonny and Cher. She was the tranny and I was the husband who didn’t even know what gender she was because we had a sexless marriage. We sang and had a TV show, and it was great.

If you could do a skit or a show with anyone, who would you pick?
I’ve always loved molly Shannon from “Saturday Night Live.” She has such an insane, zany energy, so I would love to do something with her.

Would you say you’re the gay Weird Al Yankovic?
I get that comparison a lot, and I find it flattering, so sure! Hopefully I am a little more attractive … and have a better haircut.

Well, not on the cover of the album.
[Laughs.] You’ve got a point there.

This all begs just one question: What’s next?
I’ll be shooting a lot of music videos from the album in the next year, because there are so many funny ideas I want to explore visually.