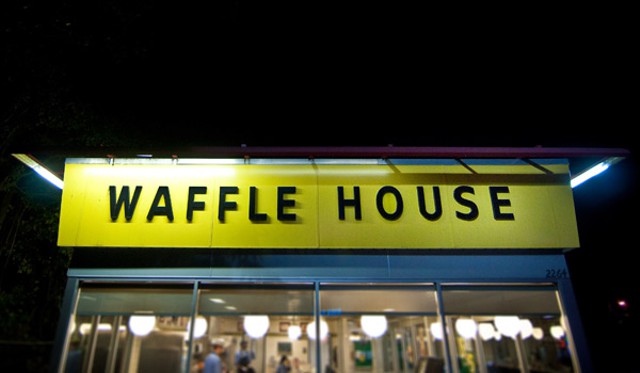 Cliff Bostock knows what it takes to turn a restaurant gay. And since the longtime food critic is gay, he also knows where to find tasty boners, food porn and brunch. But color us surprised that he went slumming recently on Cheshire Bridge Road. Not that there’s anything wrong with hitting up Waffle House, the destination spot for late-night party gays and drag queens looking to sober up through greasy food. Or the IHOP on Ponce, which he also dined in. But food critics are supposed to be haughty. And Atlanta’s red light district is so not that. It’s the street some elected officials want to scrub clean and Waffle House is the place where fags strike back. Bostock dove in for a recent column in Creative Loafing about breakfast. Sure, he did upscale. But then he hit the Midtown diners. And that’s where you get a little city culture with your meal.

First up was the popular Midtown-area Waffle House (2264 Cheshire Bridge Road). Weirdly, it was completely empty when I arrived about 9 p.m. The cook was complaining about that but mainly spent his time in a booth with two servers chatting loudly. At one point they were arguing about the sum of a series of single-digit numbers. I burst out laughing, which prompted one of the servers to bring my water to the table.

Bostock likes McDonald’s, too. But that’s just because Ronald gay sexed him. And made a music video. Photo via Creative Loafing