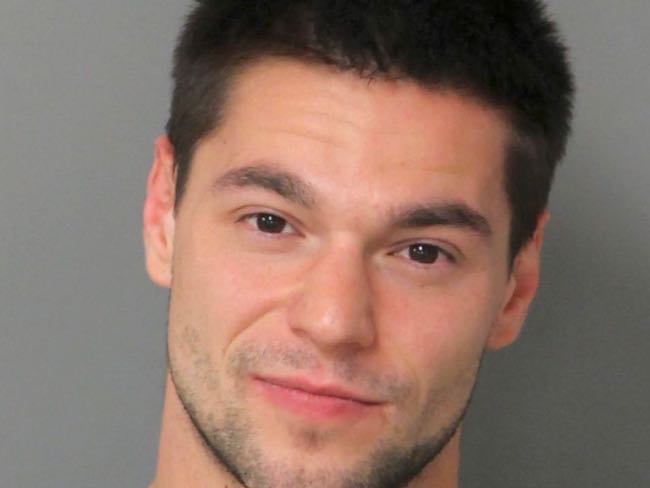 A metro Atlanta man who stars in gay adult films was arrested in DeKalb County earlier this month and charged with child molestation while already facing charges for allegedly kicking in the door of an apartment while drunk.

Zachary Robert Santangelo, 29, was arrested Feb. 3 and charged with child molestation, according to DeKalb jail and court records. He was released from jail on Feb. 6.

The charge stems from an incident on Dec. 21, 2018, according to court records. The Dunwoody Police Department, which filed the arrest warrant for Santangelo, declined to release the incident report or any details of the case.

Two days after being released from jail, on Feb. 8, Santangelo launched a Go Fund Me campaign to raise $24,500 for legal fees related to the case. It included this pitch:

Fans. As we all know I was recently incarcerated due to false allegations of a felonious act I supposedly committed in December of 2018. Due to the nature of the allegations I’d rather not share with you. Currently this charge carries a minimum of a 5 year sentence. As we all know attorneys can be ungodly expensive and this case is not one I’d be willing to take a plea bargain with. Please help. Save my ass. Or you’ll never get to see the best of me.

The crowd funding campaign was deleted a few days after being highlighted in a story by Str8UpGayPorn, which reports on the gay sex film industry. The effort had raised a few hundred dollars.

Santangelo (photo, from 2017 arrest) peforms as Aspen for several gay studios, including Men.com and NextDoor Studios. He made his debut in the adult film industry in 2011 as a model with Chaos Men. He has been married to a woman and has at least one young daughter, according to court records and his social media profiles.

Santangelo’s arrest was only the latest in a criminal record that dates back to at least 2011 and includes arrests in Florida, Georgia and North Carolina. In Georgia, jail and court records show that Santangelo has been arrested in Cobb, DeKalb and Gwinnett counties.

On June 23, 2019, Santangelo was arrested in Dunwoody and charged with criminal trespass – a misdemeanor – after allegedly kicking open the door of an apartment at about 1 a.m., according to an incident report from the Dunwoody Police Department.

When police arrived, one of the three men inside the apartment was nude and detaining Santangelo, according to the incident report.

“The residents of the apartment subdued the suspect and were holding him until we arrived,” Officer M.C. Noel wrote in the report. “Once on scene I entered the apartment door that had been kicked open with significant force with wood shards all over the ground.”

“I saw [one of the residents] in the corner of the apartment holding Mr. Zacahary Santangelo in a rear naked choke hold. I immediately placed Mr. Santangelo into custody,” Noel added.

Police said Santangelo “reeked of alcoholic beverages and admitted to drinking that evening,” according to the incident report. He slurred his words and told police he was there – with his service dog – to see his ex-wife and children.

“Mr. Santangelo was unaware that he was at the wrong apartment and forgot that his wife moved out of the area with his children after the divorce,” Noel wrote in the report.

The men inside the apartment told police they did not know Santangelo.

He was released on a $1,500 bond that prohibited from him returning to the apartment or drinking alcohol. The case remains open.

In February 2019, Santangelo posted to his personal Instagram images of a registration for a service dog named Dante. The dog is registered with a firm called the U.S. Animal Registry.

In 2018, Santangelo received an identification card from the Georgia Low THC Oil Registry, according to a social media post. The registry allows people to legally posses up to 20 ounces of low THC oil to treat symptoms from a variety of ailments, including cancer, seizures related to epilepsy or head trauma, Tourette’s syndrome, intractable pain, end-stage AIDS and Post-traumatic stress disorder.

Santangelo’s arrest in 2019 took place while he was apparently on probation for an earlier arrest in which he was accused of beating a roommate.

A Cobb County grand jury indicted Santangelo in August 2018 on a single count of aggravated assault. He allegedly hit his roommate repeatedly with an aluminum rod on March 24, 2018, according to the indictment. Santangelo, who at the time lived in Norcross, was released from jail on $16,000 bond, according to court records.

In January 2019, Santangelo negotiated a guilty plea to a reduced charge of disorderly conduct in the case. He was sentenced to 12 months probation and fined $250, according to court records.

In June 2019 – while apparently still on probation – he was arrested in Dunwoody for allegedly kicking in the apartment door.

In 2017, Santangelo was charged with criminal damage to property – a felony – after an incident in Gwinnett in October 2016, according to court records. The case was later dismissed.

In May 2013, Santangelo was charged with simple battery and criminal trespass in Gwinnett, according to court records. The case was later dismissed.

We reached out to Santangelo through his Twitter handle and phone number listed in court documents, and will update the story if he responds.