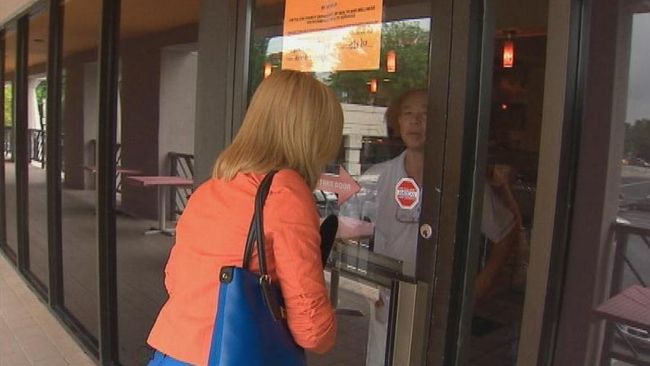 Gay fave sushi shop Ru San's in Midtown declined a health inspector's request to close last month while they fought back a roach infestation. On Monday, Fulton health officials didn't ask. They shut the place down.

The closing came after Ru San's failed another health inspection — the restaurant's third failing grade since late April when it notched a 56. On Monday, Ru San's received a 69 on an inspection coming two weeks after a failing report and a request from a health inspector to close as it dealt with roaches and other unsavory issues.

What prompted the latest failing grade? A roach infestation. Again. And hazardous food conditions, according to the report. A court citation helped force the closure.

The restaurant's disgusting track record also attracted the attention of WSB, which sent Carol Sbarge to investigate. During her stakeout on Thursday, she found a bug specialist, locked doors and some startled employees. Funny if it wasn't so serious.

Wednesday Sbarge saw an exterminator at Ru San's. They can't reopen until they fix all the violations and eliminate the roach infestation.

And then there's this caption on a photo (above) of Sbarge at the restaurant's entrance.

Sbarge wanted to find out what they are doing to get rid of the bugs but no one with the restaurant would talk.

The gays may be rethinking their sushi preferences. Fenuxe readers named Ru San's among their Best of Atlanta for Sushi in 2012. In 2010, GA Voice readers voted it second for Best Asian in the media outlet's Best of Atlanta.