We have known and loved Martinez for quite a while. His is an interesting life, what with all the work he does as the Fashionado blogger, bow tie expert, former Grady High Urban Couture teacher, “Project Runway” fanatic, celebrity hobnobber, and passionate PALS fundraiser organizer.

So you know “Style Mag VM” will be just as impressive. And it is, even before hitting the web on Aug. 15 with interviews, shopping tips, and nightlife in Atlanta’s vast cityscape. Martinez decided to work with the best – again — when Emmy-winning producer Andrea Berry approached him to host the show. 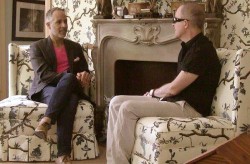 “Andrea is great,” Martinez says. “What sets her concept apart form all the other web-based magazines is that it’s video only, so it’s like well-produced TV. I’m really excited because even though fashion is the cornerstone, we’ll also be featuring it as a lifestyle magazine to cover more ground. I can do features on great restaurants, bars, celebrity interviews, and we’re not limited to one genre.”

“I’m not obsessed or consumed with being gay, but being a human being living my life to the fullest who happens to be gay,” he says. “And it’s the same with the show. We’re still interested in being gay inclusive and representing all the facets of who you are. There’s the beauty, modeling, fashion and philanthropic side, and yes, of course there’s the gay side.”

“We all need to represent ourselves as well-rounded, positive members of our community,” he adds.

After the magazine launch, you can check in with Martinez’s Fashionado blog to watch short-format promos like this one of upcoming episodes that tease the full length what’s-hot features headed your way on “Style.” Be on the lookout for Martinez and his roving cameras, as well as news on upcoming “Style Mag VM” events.

“Style with E. Vincent Martinez” premieres Aug. 15. For advance looks at what the show is up to, connect with Martinez and the show now on Facebook and Twitter.