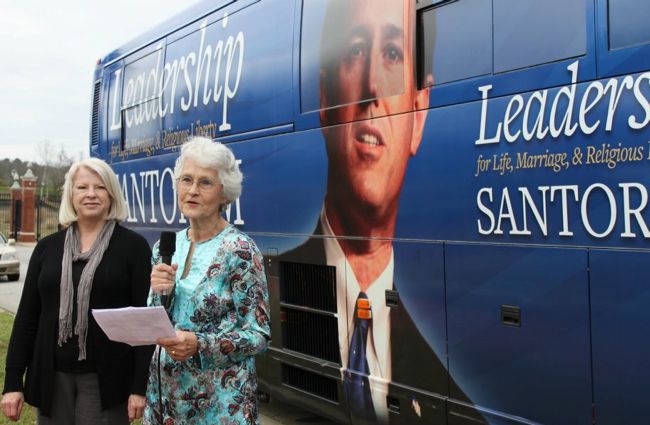 On one side is a bus full of anti-gay woman with a boner for Rick Santorum. On the other is a bus packed with LGBT activists promoting equality. They will square off Monday afternoon at the State Capitol in downtown Atlanta.

It’s a roadshow face off made for reality TV.

Riding in a bus emblazoned with Santorum are the (anti-gay) women speaking out for the GOP presidential candidate and calling their effort the Rick Bus tour. Conservative creativity at its best.

They are on a week-long effort to spread Santorum ahead of Super Tuesday voting in Georgia. Sorry, but voters here are going with our own homegrown, anti-gay bigot Newt Gingrich.

Fresh from a weekend in Columbus and Augusta, the Rick Bus tour hits Savannah on Monday morning before arriving at the Gold Dome for an afternoon conservative, anti-gay love fest. The tour includes Marilyn Musgrave, the former Colorado lawmaker who backed banning gay marriage with an amendment to the U.S. Constitution, and Maggie Gallagher, who is the current director of the Culture War Victory Fund and National Organization for Marriage co-founder and former board chair. Scheduled to join them on Monday in Atlanta:

Turns out that the Rick Bus tour hits Atlanta at the same time Soulforce rolls into the city with its Equality Ride. So local rally veterans GetEqual GA and Queer Justice League confabbed with Soulforce and asked them to bring their bus downtown to counter the Rick Bus.

Soulforce spends its morning on the campus of Emory, that bastion of LGBT love in Decatur. The rest of its five-day stay in Atlanta includes heading to church, meeting with Muslims and attending a Shabbat service with the gay Jews.

The bus showdown takes place at the Gold Dome at 3:30 pm. It’s a safe space for the ladies of the Rick Bus tour. After all, it’s where lawmakers squashed a workplace equality bill last week and used its own police force to attempt to quash coverage of the action.