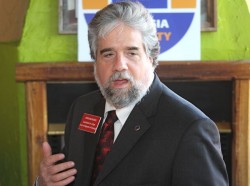 For the handful of you that actually went to the polls on Tuesday, consider this: Progressive candidates — you know, the ones that dared court LGBT votes — gained three victories.

In November’s general election, the three LGBT groups that endorsed candidates – Georgia Equality, Atlanta Stonewall Democrats and Georgia Log Cabin Republicans – scored a combined 29-23 with their picks (and fine in runoffs). Not great, but not bad considering Georgia’s political climate.

In Tuesday’s runoff, Georgia Equality was the only group to issue endorsements and their six candidates – they added a pick after the general election – split. Three won – Chris McFadden (photo), Georgia Court of Appeals; Courtney Johnson, DeKalb Superior Court; Jared Bailey, Athens-Clarke Commission – and three lost. The ones that came out on the losing side were Tammy Lynn Adkins, Georgia Supreme Court; Shelitha Robertson, Fulton Superior Court; and Gwen O’Looney, Athens mayor.

An interesting note about McFadden: He ran an inclusive campaign that not only helped earn him a nod from Georgia Equality but also the Fulton County Republican Party. Now those are interesting bedmates. McFadden was also one of several candidates on hand in October for a Georgia Equality event toasting its endorsed candidates.