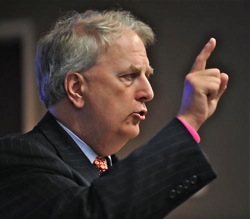 When it comes to Georgia’s race for governor — yes, it’s election season again — some gay Democrats are putting their support behind former Gov. Roy Barnes (photo).

That’s the takeaway from a straw poll conducted by the Atlanta Stonewall Democrats during their “Love Me, Love Me Not Valentine Party” earlier this month. Ironically enough, the theme of the event is an apt description of the race for governor. And we’re talking about just the Dems. More on that in a minute.

There are five Democrats in the race, though when Barnes jumped in last June, he instantly became the front runner. The once-popular, even progressive, former governor has a fat campaign war chest, statewide name recognition and knows how to win (and lose) a statewide race. The others include Attorney General Thurbert Baker, Ray City Mayor Carl Camon, House Minority Leader DuBose Porter and former Adjutant Gen. David Poythress.

When asked their preference, local Stonewall Dems picked Barnes nearly two-to-one over second-place finisher Poythress. Barnes notched 44 votes, Poythress at 25, Porter and Canon with 13 each and Baker at 2. Sadly for the attorney general, his vote tally came in at one less than Undecided, which scored 3 votes.

“I think GLBT voters and our allies have been waiting for eight years for a fair-minded Democratic governor, and we’ve been watching this race from the beginning,” Tim Cairl, Stonewall’s board chair, says in a press release. “Georgia is definitely ready for a common-sense, practical and fair-minded governor, and we are excited that we have a good field of candidates for 2010.”

Barnes is by no means a Pride-marching, gay-loving Democrat. But the progressive did reach out to LGBT voters during his term and unsuccessful re-election campaign. Barnes was the first sitting governor in Georgia to appear before a gay organization—his talk in July 2000 to the Atlanta Executive Network—and later met with Georgia Equality and the Human Rights Campaign in the 2002 campaign. He even interviewed with the gay press a week before the election.

During a brief question-and-answer session following his AEN speech, Barnes expressed support for principles of tolerance and non-discrimination, but wavered on gay adoption and did not endorse any specific gay rights proposals.

Compare that to his 2010 competitors, and that’s where we get to “love me, love me not”: Baker supported the state’s defense of the anti-gay marriage Amendment 1 in 2004, Poythress hasn’t talked yet about gay issues, and Porter twice voted in favor of the state constitutional amendment banning gay marriage in the House.

Porter, apparently in an effort to soothe the gays as he cranked up his gov bid, was scheduled to appear at the Human Rights Campaign dinner last May, but was a no-show. Porter has also taken a shine to saying that he can “be a Christian and a Democrat.” That’s all fine and good (and even true), but in Georgia politics, that sort of quip is often followed with rants against gay issues and other progressive causes.

The Republican field in the governor’s race is already going rogue with candidates making hard right turns, politically speaking, and staking their claim to denouncing LGBT issues and voters the most.

A poll in January showed Barnes as competitive against all GOP candidates, though a new poll this month shows that three of the four top GOP challengers are now slightly ahead of him.