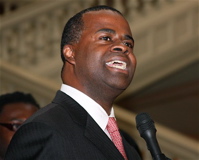 Atlanta Stonewall Democrats cited Reed’s track record on LGBT issues while in the Georgia General Assembly, despite his declaration during the mayoral campaign that he supports civil unions and not same-sex marriage.

“What earns Kasim our endorsement in a race where nearly all the candidates voice support for LGBT equality is performance over promises,” the group says in a press release. “We value his strong record in the legislature, his status as one who can bring a fresh, outsider’s vision to a city government that has largely broken down, and his proven ability to establish productive relationships with a Republican state legislature and governor.”

The endorsement of Reed opens a divide between Atlanta-based LGBT groups and their picks for mayor. Georgia Equality endorsed Lisa Borders for mayor earlier this month. Both groups looked past Mary Norwood, a leading contender along with Borders and Reed, and Kyle Keyser, the only openly gay candidate in the race.

For Reed, though, the endorsement from Atlanta Stonewall Democrats adds to one he picked up Sept. 10 when state Rep. Karla Drenner, the only openly lesbian member of the state legislature, joined a host of progressive state lawmakers in backing him.

“We are aware that Kasim has stated his support of civil unions with full benefits. However, Kasim has proven his commitment to full legal equality for same sex couples when he led the effort in the State Senate against the Constitutional Amendment to ban gay marriage,” Atlanta Stonewall Democrats says.

Brackman is running for the Post 1 At Large seat on the Atlanta City Council. He’s also been endorsed by the Victory Fund.

Brodie is one of three gay men and six overall candidates for the District 6 seat on the City Council. Atlanta Stonewall Democrats is the first gay group to announce an endorsement in the race.

Bell is a lesbian seeking the District 58 seat in the state House. She’s also been endorsed by the Gay & Lesbian Victory Fund and Georgia Equality. She formally kicked off her campaign Sept. 15 during a fundraiser in Glenwood Park.

Williams, a gay man seeking the District 3 post on the Decatur City Commission, has been endorsed by the Victory Fund and two gay-friendly state lawmakers.

“He has long worked to cultivate a strong relationship with LGBT Atlantans, promoting various non-profit and civic engagements devoted to civil rights,” the group says. “Caesar is strongly committed to protecting existing domestic-partner benefits for Atlanta city employees, while also working proactively to urge the state Legislature to pass anti-bullying legislation. Caesar also recognizes that the city has room for improvement in how it supports transgender Atlantans through municipal policies, and supports improving those policies as City Council president.”