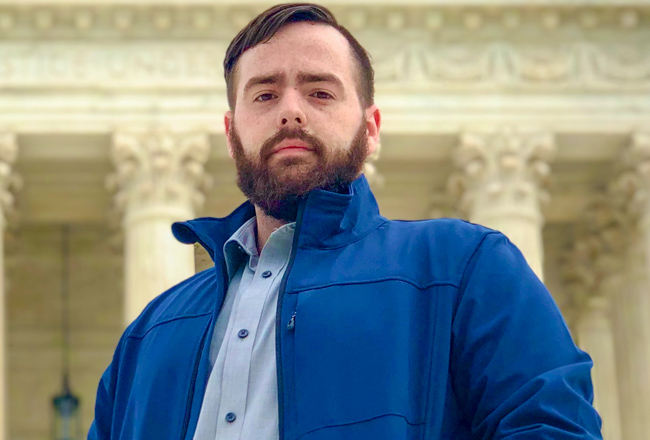 Democratic Party activist Andrew Niquette is running for a Georgia House seat in Savannah to fight for veterans, the environment and LGBTQ rights.

“This is a state that still has a lot of catching up to do when it comes to equality and LGBTQ rights,” he told Project Q Atlanta. “Members of the LGBTQ community are as equally contributing members to society and deserve the freedoms and protections of those who are non-LGBTQ.”

Niquette is eager to take on state Rep. Ron Stephens, a Republican who has represented House District 164 for 22 years.

“The incumbent has been completely silent,” Niquette said. “You ask a lot of residents in the district and they’ll tell you they don’t know who he is.”

Stephens ran unopposed in the general election for several election cycles until 2018, when financial consultant Alicia Scott came within five points of beating him.

“He’s gone into hiding since the last election,” Niquette said. “He came close to losing his seat in 2018 and wants to lay low. He’s become an inactive legislator.”

“He can’t possibly know what’s best for his constituents when he’s not even talking to them. He knows his time is coming to an end and it’s time for better leadership in the district,” he added.

Stephens said he's “not sure where that comes from” in response to Niquette's comments.

“I’m at several meetings every day and weekends,” he said.

Niquette was pulled into the public eye in 2016 when former state Rep. John White denounced him and attacked his sexual orientation in an email to leaders of Georgia Democrats after White learned of Niquette's bid for a seat with the county party.

Niquette briefly jumped into the House District 154 race in Albany in 2017, but he left the race to run Lisa Ring’s U.S. House campaign for the 1st Congressional District against Rep. Buddy Carter.

Niquette realizes people will question whether he has enough political experience at 22. But he points to his work on Ring’s campaign, and the 2016 presidential campaigns of Sen. Bernie Sanders and Hillary Clinton. He was also a delegate to the 2018 Democratic National Convention.

“I’ve really had the opportunity to be out there and be engaged with voters, particularly here in coastal Georgia,” he said. “It’s really put me in a position where I think I understand what kind of leadership and change needs to be made in the district and throughout Georgia overall.”

The primary for House District 164 is in May.

Out former Atlanta City Councilmember Alex Wan is considering a run for House District 57 in Atlanta.