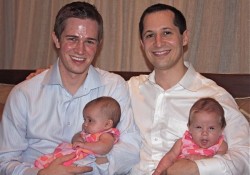 Nathan Deal made gay Georgians and a group for LGBT youth a target during his successful primary campaign. Now a gay father and attorney is returning the favor.

Seth Woodard Persily (photo right), a father of two with partner Nathan, turned his sights on the former Congressman and current GOP nominee for governor after Deal’s anti-gay attacks during the summer campaign. His goal? Sabotage Deal’s reputation so that every time Google sees the words “Nathan Deal,” the search engine offers up “ethics.”

The effort has caught the attention of both the Deal campaign and the Atlanta Journal-Constitution, which profiled Persily’s efforts on Wednesday.

It may be the first campaign of its kind, one that opens an entire new field of worry for political candidates.

Perhaps more important, it is a low-cost area of activism open to any small group of people with access to a computer, a keyboard and time. Persily insists he is acting as a private citizen, not on behalf of the rival campaigns of Democrat Roy Barnes or of Libertarian John Monds.

During a bitter primary campaign, Deal attacked opponent Karen Handel for her past support of LGBT issues, including domestic partner benefits. He also singled out YouthPride in a campaign commercial, an effort that earned him rebukes though GOP voters didn’t seem to mind.

That prompted Persily, who sits on the YouthPride board, to take action. The attorney is the executive vice president of Penn Multimedia, which specializes in reputation management.

“We flood the Internet with positive results so that video or bad review or that column is no longer in the top 10 [search] results,” Persily said. “Well over 90 percent of people will never go to the second page of Google. If you can control what’s on that first page of Google, it doesn’t really matter what people are saying about you anywhere else — because no one will ever see it.”

Going after Deal was something new for Persily.

“I’ve never tried to harm someone’s reputation. This is a first for us,” he said. “We’ve always been in the business of cleaning people’s reputations up.”

People interested in participating can type “Nathan Deal ethics” into Google as many times as they want. Over time, it could make a difference when people search the name. The Deal campaign has already taken notice and offers up this retort:

“As the frontrunner, we have to expect liberals to attack us. And they have to expect to be attacked in return,” said Brian Robinson, spokesman for the Deal campaign.

(Read more and see how to join the effort.)