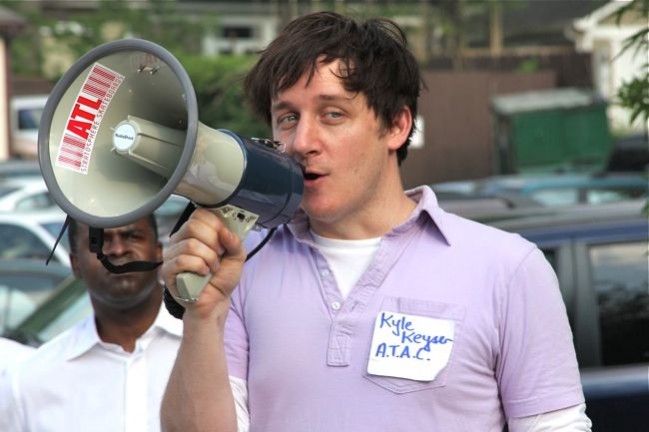 Oh, what a difference a year or so makes. It wasn’t all that long ago that gay crime fighter and former mayoral candidate Kyle Keyser stood side-by-side with Mayor Kasim Reed. Now, he’s holding a rally to knock the mayor’s crime-fighting initiatives.

Keyser, whose founding of Atlantans Together Against Crime propelled him into a grassroots activist media darling, is planning a vigil and rally with Safe Atlanta for Everyone for Wednesday at 6:30 pm. on the steps of City Hall. View the Facebook invite for the event.

The goals are pretty straight-forward:

To stand together, as Atlantans Together from all neighborhoods, to say that crime is unacceptable in any part of our city.

To remind Mayor Reed that addressing the root causes of crime was a campaign promise and an area where Atlantans are looking for bold, visionary leadership.

To offer specifics on how to address the “root causes of crime” and what that really means.?

To seek a comprehensive plan from City Hall in reducing Atlanta crime, one with a holistic vision that extends beyond the police department.

Keyser and the Reed administration have been in a bit of back and forth about crime, with Keyser taking the mayor to task for what he dubs is Reed’s lack of a comprehensive approach to fighting crime. But it wasn’t all that long ago that the former “Person of the Year” – July, in fact – backed both Reed and his pick for top cop, Chief George Turner. It was just a short time before that when Keyser was one of two gay men tapped by Reed to serve on his search committee for police chief.

Dial back even further – to April 2009 – and it was Reed who was among several mayoral candidates attending a Keyser-organized crime rally in the gayborhood (photo). That rally came as part of ATAC’s highly-publicized series of events to call attention to crime in the city, which became a key piece of the then-mayoral campaign.

Here we are months later and now there’s a gulf between Keyser and Reed. Is it a coincidence Wednesday’s rally takes place at City Hall within earshot of Reed? Not so much.