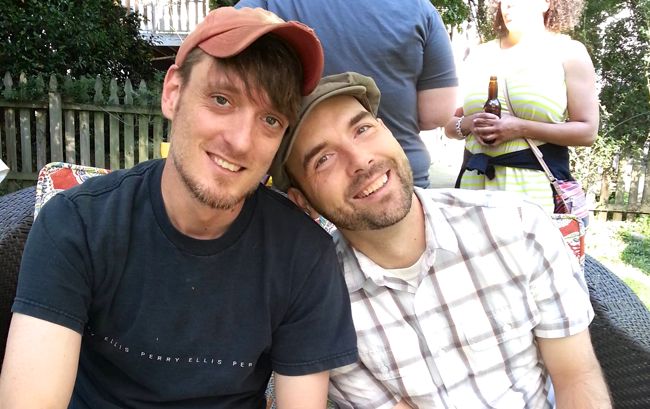 A gay couple arrested during a raucous East Point City Council meeting on Monday says they were roughed up by police officers, while supporters are questioning if they were targeted over their sexual orientation and race.

Dustin Drabot (photo right) and Matt Sweitzer (left) refused to leave the meeting when the presiding officer at the time, Mayor Pro-tem Marcel Reed, called for their removal. Police officers surrounded the men and carried them out of the council chamber, according to the AJC.

Drabot, who last year was ejected from a public meeting when he argued with a Pittman supporter, said he may have giggled after Reed demanded quiet but that he was not disruptive. He contends Sweitzer was only guilty of associating with him.

After Reed called for their removal, both men refused to leave when encircled by officers, who then lifted them and carried them outside to be handcuffed. Drabot said the hole in the wall was caused by an officer who fell against it. Drabot also complained that they were body-slammed on the floor outside the meeting, leaving both men banged up. Friends and neighbors were alerted to bail them out via social media.

On Friday, Drabot will learn if he's been named Business Man of the Year during the Atlanta Gay & Lesbian Chamber of Commerce's Community Awards Dinner. Drabot, who works for Your Guy For That @ Intown Focus Realty, is one of five people nominated for the honor.

After his arrest, Drabot alleged in a Facebook post that officers grabbed his crotch and slammed his face into the floor.

I can't thank you all enough for supporting our Civil Disobedience. However, some of the police officers involved in arresting us clearly crossed a line. Please put the word out that we would like a copy of all videos taken of the incident at City Council tonight. The hole in the wall was completely done by "Officer Overkill" after I was beyond that point, then he grabbed my crotch, picked me up horizontally and body slammed my face onto the hardwood floors of the Jefferson Station lobby. Worst of all, our Police Chief stood by and let all this violence happen to citizens of our great city.

Sweitzer on Tuesday channeled Pink Floyd as he mocked the council in a series of tweets.

We don't need no city council We dont need no thought control No dark sarcasm in the chambers Council leave them gays alone #EastPointGA — Chivalry is Dead (@SirMattyCakes) August 20, 2013

Supporters questioned the motivation behind arresting the gay couple.

East Point includes a large and active contingent of LGBT residents as well as gay City Council member Lance Rhodes. The city is home to the popular charity drag show from the East Point Possums. And in 2009, it joined just a handful of municipalities in Georgia including sexual orientation and gender identity in its nondiscrimination policies.

But the city often struggles with a divide between its LGBT population and gay-friendly policies, and a conservative black population. Mayor Earnestine Pittman and Rhodes have tangled bitterly in the past. Reed, who ordered the removal of the gay couple, is a Pittman ally.

Pittman, who is up for election this year along with several at-large council members including Reed and Slaughter-Gibbons, was out of the room when Drabot and Sweitzer were arrested. She blamed the controversy on council members stirring up opposition to the proposed alcohol ordinance changes for their own purposes. Those proposed changes have not yet passed.