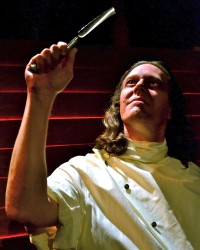 Actor Clint Thornton gets to murder his longtime partner Bryan Mercer every night for the next three weeks. Onstage, that is. The Atlanta couple plays opposing factions in the ensemble of Fabrefaction Theatre Company’s version of “Sweeney Todd.” In the musical thriller, Thornton (top photo) stars as the titular Sweeney Todd and Mercer plays his nemesis, the notorious Judge Turpin who sent him to prison years ago and stole his ex wife for himself. When Sweeney comes back to London, he exacts revenge and gets it with a straight razor as he gives the judge a shave. Thornton and Mercer have been performing together and separately in Atlanta for well over a decade, but not often onstage at the same time. Mercer laughs that they are “two gay men and a couple who get to sing the ‘Pretty Women’ number every night” before the judge’s demise. The couple thinks it's, well, interesting to play opposing roles on stage and partners at home. In the devilishly vengeful lead role, Thornton says he taps into something appropriately frightening for Halloween season. "I was slightly apprehensive to take on this project because of the ways it could affect certain areas of my consciousness,” Thornton says. “Revenge used to be a much bigger part of my personality, and I was afraid of darker tendrils of my younger self taking me unaware." He did obviously accept the role, saying "This opportunity has been truly unique and so far, no issues have come at home." For his part, Mercer says "Sweeney Todd" is Stephen Sondheim's best work. He has been in two previous versions of the show, but both were more than two decades ago in various roles. Judge Turpin is an appropriate role for him now: The actor jokes that he is too old to play the young boys anymore. He calls this production a scaled down version, one that is very intimate. The small cast doubles in various roles. “It’s a very personal interpretation, quite the actor’s version,” Mercer says. “The emotions have to fit the space. We have to rein it in and make the intensity pressure-cook in a different way.” Mercer is a fan of the relatively new company and has actually taught a number of its principles, including the artistic director of the troupe and the director of this show. He says he’s honored to participate in the production. “Sweeney Todd” opens Thursday and runs Thursdays-Sundays through Nov. 13 at Fabrefaction Theatre Company Photo by KVC Photography

Jim Farmer is an Atlanta-based freelance writer and public relations professional specializing in film promotions. He has been a theater and pop-culture critic for more than a dozen years and is the director of Atlanta's annual Out On Film gay and lesbian film festival.