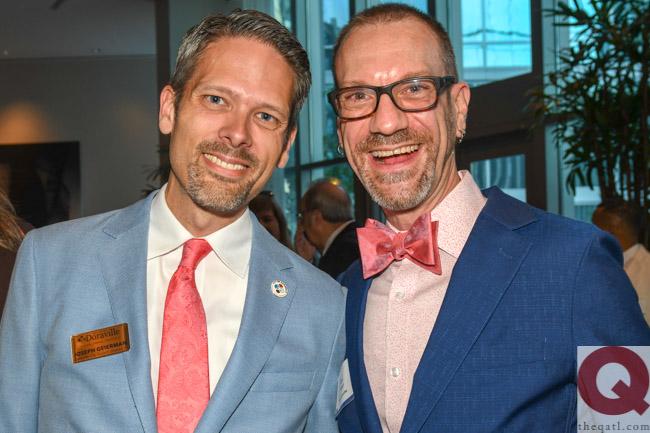 Joseph Geierman is giving up his seat on the Doraville City Council for a shot at becoming the city’s first openly LGBTQ mayor.

Geierman (photo left with husband B.J. Abbott), one of two openly LGBTQ members of the council, announced the move on social media on Monday.

“I’ve served on city council for a year-and-a-half and there were a lot of things I wanted to work on including redeveloping our downtown, focusing on Buford Highway and making sure we have the proper zoning for the future here and have come to the realization that we’re not going to have movement on these things without real leadership,” he told Project Q Atlanta. “Looking out and seeing who was out there, I didn’t see a lot of people who were likely to step up and run this cycle.”

Geierman said he started seriously considering a run against Mayor Donna Pittman about two months ago.

“That’s when I realized that under the current mayor, there was no interest in appointing people as permanent members of the Downtown Development Authority — which we need to work on redevelopment issues — and just the fact that the budgeting process was so disorganized and there wasn’t a lot of leadership on that,” he said.

Pittman did not respond to Project Q’s request for comment on Geierman’s remarks.

Geierman acknowledged that serving just a year-and-a-half on the council could be an issue in the race. He cited his professional experience at Troutman Sanders and his work on several city commissions and committees to highlight his record.

“I am director of real estate for one of the largest law firms in Atlanta and manage a real estate portfolio of over 700,000 square feet and a budget that’s several times the size of Doraville’s,” he said. “I think that Doraville needs someone with more business experience and a fresh perspective to help move this city forward.”

Doraville needs to improve its business permitting and licensing processes, create more mixed-use development along Buford Highway and create new boards and commissions to improve government transparency, according to Geierman.

Getting elected to the council as an out gay man in 2017 “was not something I ever imagined I could do,” he said. If elected in November, he would be Doraville’s first openly LGBTQ mayor and just the second LGBTQ mayor in Georgia. Hiawassee Mayor Liz Ordiales, a lesbian, was elected in 2017.

“I am amazed at how much the world has changed even just in the last 15 years,” Geierman said. “Certainly my experiences with discrimination and being a minority in some situations does inform how I treat everybody and would certainly inform how I approach being mayor as well.”

Geierman will give up his District 2 city council seat this week so that a special election can be held Nov. 5 along with the mayoral election.

“I need to [resign from the seat] before the end of July because if I do it then, the city can have the election at the same time as the rest of the elections,” he said.

That will leave Stephe Koontz as the only LGBTQ councilmember in Doraville. The pair were elected in November 2017 and took office in January 2018.

Geierman and Pittman voted in favor of a broad LGBTQ-inclusive nondiscrimination ordinance that Koontz spearheaded and the city passed in November.