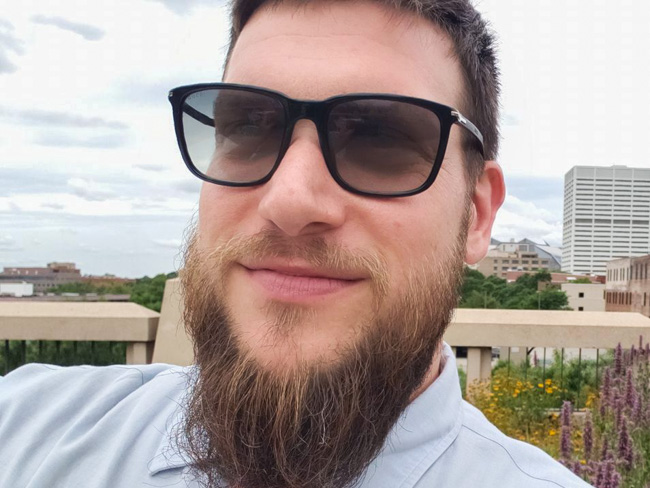 A gay civic activist announced a run for an Atlanta City Council seat left vacant after the death of a sitting member. If he wins in the March special election, Matthew Cardinale (top photo) would become the only openly LGBTQ person on the council.

Cardinale, 37, is a longtime Atlanta City Hall watchdog and the editor of Atlanta Progressive News.

“My number one priority for District 3 is to use my policy expertise in affordable housing to mitigate gentrification and ensure the preservation and creation of housing to serve the hard-working low-income families and seniors who call our district ‘home,’” Cardinale said in a press release.

“District 3 is at a crossroads, where we must take proactive steps to ensure that as new development continues to come into District 3, that we have homes we can rely upon to stay affordable in perpetuity,” he added.

Cardinale has been a fixture at Atlanta City Council meetings over the years — sometimes rapping his views during public comment. In 2011, he filed a pair of lawsuits against the city over closed-door meetings held by the council. The Georgia Supreme Court ruled in his favor in 2012, saying that the city violated the state’s Open Meetings Act. He later showed off the checks that the city cut him as a result of the ruling.

Qualifying for the election to replace the late Ivory Lee Young will take place Jan. 23 – 25. The election will take place March 19 and, if necessary, a runoff will be held April 16. Cardinale is the first candidate to announce a run for the District 3 seat.

Alex Wan was the last openly LGBTQ member of the Atlanta City Council. He lost a bid for City Council president in 2017, leaving the council without an LGBTQ member for the first time in two decades.

A 40-year-old LGBTQ woman and bartender at a popular Midtown restaurant was stabbed and killed early Wednesday as she walked her dog in Piedmont...
Read more

They’re back, and you love it. Get ready for a prodigal return, notorious return, infamous return and a triumphant return to Atlanta’s LGBTQ events...
Read more
Q ATLus

The gay and allied jocks of National Flag Football League of Atlanta aren’t done with 2021 yet. On the heels of their season championship...
Read more
Q ATLus

The heat of summer meets its match in this week’s Q ATLus magazine. Heretic's hot weekend on the cover opens up on hot topics including eight...
Read more
News

Kimora Blac wows the After Dark crowd at X Midtown