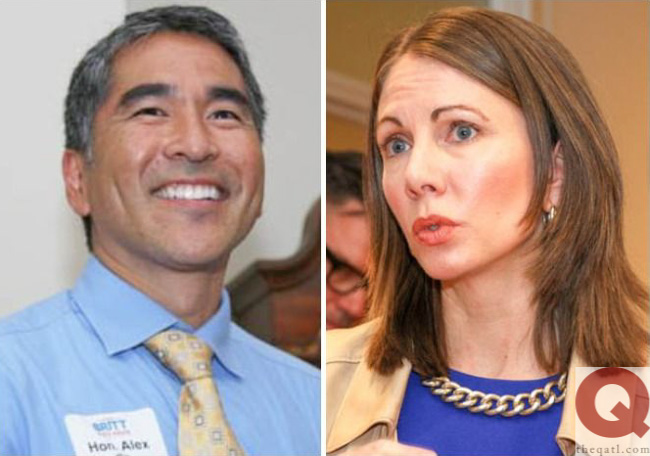 Former Atlanta City Councilmember Alex Wan and former gubernatorial candidate Stacey Evans will square off in the Democratic primary for House District 57 in Atlanta in May.

Wan (photo left) and Evans (photo right) look to fill the seat of state Rep. Pat Gardner, an LGBTQ ally who is leaving the legislature after 20 years. House District 57 stretches from Southwest Atlanta through downtown and into Midtown.

It’s a full-circle moment for Wan, whose first political campaign was a 2004 run for Gardner’s seat.

“Interestingly, all the issues that I cared about and motivated me to run in 2004 still apply,” he told Project Q Atlanta.

Wan – who’s lived in Morningside for over 25 years – went on to serve on the Atlanta City Council from 2010 to 2018. He was the first Asian American and first openly gay man elected to the council.

He ran for Atlanta City Council president in 2017 but lost to Felicia Moore. He became executive director of the non-profit Horizons Atlanta and was named to Atlanta Mayor Keisha Lance Bottoms’ LGBTQ Advisory Board in 2018.

Wan said he always kept his eye on the House District 57 seat.

“I’ve stayed engaged with the district and when I heard on the news about Pat, I just kind of had to do some soul searching to decide whether I felt like I still had things to contribute to the district, issues I still wanted to work on and whether it made sense for me personally,” he said.

“Everything aligned fortunately and I decided to toss my hat in the ring,” he added.

He also wants to continue fighting for what he says got him into politics in the first place – LGBTQ rights.

“We’ve made a lot of progress, but it does feel like in the last two years we’re facing a lot more pressure and potential setbacks,” he said. “I won’t give up that fight. I want to be down in the arena where it matters most.”

Wan is the 12th openly LGBTQ candidate for the state legislature in 2020, including five incumbents who are running for re-election.

Evans’ run for House District 57 is a return to politics after losing to Stacey Abrams in last year’s Democratic primary in the governor’s race.

Evans represented House District 42 in Cobb County from 2011 to 2017. During that final year in office she introduced an LGBTQ-inclusive civil rights bill, but it failed to get any traction.

She’s running for House District 57 in part to see such protections become law.

“It’s insane to me that we still don’t have these protections in Georgia,” Evans said. “I introduced a bill to remedy that and it’s stills sitting there. I’d like to get back to that and make sure that becomes a reality.”

The civil rights bill will have a better chance of passing because of changing attitudes about LGBTQ issues, Evans said.

“We have to keep talking about it,” she said. “The more we talk about it, the more we push, the easier the fight becomes.”

Evans also pledged to continue fighting anti-LGBTQ “religious freedom” legislation, as she did during her first stint in the state House.

“It’s frustrating that the Republicans keep bringing up RFRA legislation, but as long as they bring it up, I’ll be there to fight against it and speak out against it,” she said.

Taylor served in the state legislature with Gardner from 2009 to 2013. He was forced to come out as gay under pressure in 2011. Redistricting pitted the pair against each other in the District 57 race in 2012, with Gardner pulling out a win. Taylor is now Bottoms’ senior advisor.