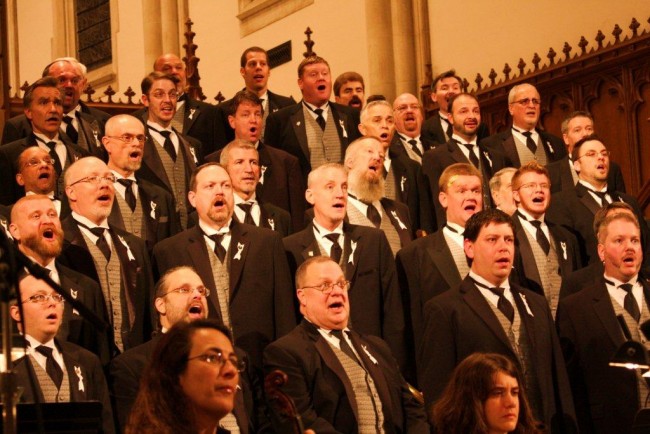 Not since “The Adventures of Priscilla, Queen of the Desert” has there been this large of a group of gay men singing while cruising the highway in a bus. But later this month, that’s exactly what happens with the Atlanta Gay Men’s Chorus.

The gay chorus, well rested from their annual holiday concert series (photo), is preparing to hit the road this month for the five-city tour “The Road Leads Back: Georgia On Our Minds.” With the backing of Macy’s and thanks to a big tour bus, the 100-voice chorus travels south to Macon on March 19 to open the series. The next day, they hit Savannah and follow that with a stop in Augusta.

On March 25, they perform in Athens before returning to Atlanta for two nights and three performances March 26 and March 27. Tickets, which range from $15 to $40 depending on the performance and venue, are now on sale.

“Our mission is to entertain, educate, and connect audiences and members through music that is distinguished for its creativity, diversity and artistic excellence,” AGMC Executive Director Keith Fenton says in a prepared statement. “We have a responsibility to bring our positive message of diversity and inclusiveness not just to the people within the metro area, but to those from smaller communities who may be searching for affirmation. Not every area can sustain a large, professional community group such as the 100-member AGMC, and we’re proud to ‘take our show on the road’ this spring.”

“Journeys,” the first part of the program, includes Wagner’s “Pilgrims Chorus,” selections from “Sinfonia Sacra” by Daniel Pinkham, and classics such as “He Ain’t Heavy, He’s My Brother,” Billy Strayhorn’s “Take the A- Train,” and the timeless “Georgia On My Mind.” Part two of the concert features highlights from the AGMC’s “Shaken, Not Heard: Stories of Gay Men, Faith and Reconciliation” from last season.

“The interest generated by this unique and powerful work far exceeded our expectations,” AGMC Artistic Director Kevin Robison says in a prepared statement. “Since it’s about each person’s personal journey, a shortened version of this work fits perfectly within the theme of our concert tour.”