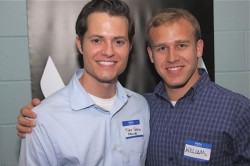 The Atlanta Gay & Lesbian Chamber of Commerce took its Fourth Friday Mixer to the offices of the upscale gay magazine Fenuxe on Friday.

The magazine took a break from its production schedule to make room for the gay business group, cocktails and food. You know, business types need to nosh while networking. The publication works out of offices near Morningside-Lenox Park and Briarcliff Road a few doors down from the popular Floataway Café. 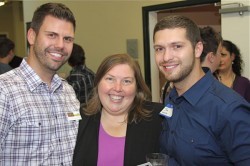 Publisher Tyler Calkins and Editor William Duffee-Braun (top photo, left to right) were on hand to greet guests and introduce them to the publication, which launched in April. The title of the gay glossy is an acronym for the magazine’s promise of fashion, events and entertainment, nightlife, urban culture, x-plore (travel) and eats-oriented content.

In July, the magazine hosted its Launch Party at Aurum. Nearly 400 people stopped by the three-hour event to enjoy drinks, a raffle and an evening that also benefited For the Kid in All of Us, the group that organizes Backpack in the Park and the annual Toy Party in December.