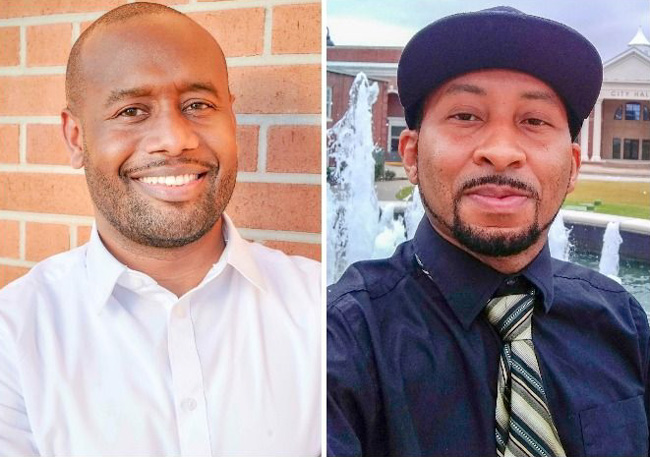 An East Point City Council election was tainted by the late disqualification of a candidate and a lack of transparency and should be redone, according to two gay candidates in the race.

The Secretary of State’s office also confirmed that it is investigating complaints about the race.

Gay educator Davion Lewis was disqualified from the race for the Ward A seat on the council just one day before the Nov. 5 election. The city clerk cited an East Point resident’s complaint that Lewis (photo left) moved to the city in December, but candidates are required to live in the city for at least one year before an election.

The last-minute disqualification and the city’s failure to notify residents about the move caused confusion for voters on Election Day, according to Lewis. There was also two weeks of early voting prior to the disqualification.

“There was a concern that the disqualification was not announced publicly,” Lewis told Project Q Atlanta. “There was a notice posted at the voting site, but the notice was a piece of paper posted at the check-in desk and nowhere else, so it was not very visible.”

Lewis also called it “very suspicious” that the vote totals for he and Mike Herring, a gay write-in candidate, were not released after the election. Lance Robertson won the race with 357 votes. Some 107 write-in votes were cast.

Herring (photo right) filed a complaint with the Secretary of State’s office about Lewis’ disqualification, which he called “very peculiar.” Herring’s chances of making a runoff were dashed by the disqualification since Lewis would have helped split the vote, he said. A candidate must get at least 50 percent of the vote or the race goes to a runoff.

“It was late and it crippled my campaign and ended his because we needed a full slate of candidates to make it to the runoff,” he told Project Q. “A lot of people just showed up confused about the disqualification. That had the effect of swinging the election to one person. It should have just been left alone until after the election.”

“It’s ironic that both of the LGBTQ candidates got struck at essentially the same time. I’m not saying there was prejudice among the voters, but the process doesn’t seem right,” he added.

The Secretary of State’s office is investigating the complaints, according to Walter Jones, the office’s communications director for voter education.

“We have talked to Mr. Herring and our investigators are looking into the matter,” he told Project Q.

The Secretary of State’s office will send its findings to the state elections board, which can levy a fine or issue sanctions but does not have the authority to redo an election, according to Jones. That would have to be handled in the local court system. The board could also take up to a year to issue its findings.

A city spokesperson did not address Lewis and Herring’s specific complaints about the race or provide the vote totals for either candidate when asked for them by Project Q. She provided a statement from City Clerk Keisha McCullough.

“The city conducted its investigation and conducted the disqualification in accordance with state law,” McCullough said.

Lewis said his campaign team is monitoring the situation and he hopes it’s resolved swiftly.

“I know a lot of residents are calling for a new election,” he said. “In my opinion, given that the election was mismanaged from beginning to end and that the election has been compromised, I would definitely agree with their concerns.”

Herring said every vote needs to be counted.

“Let’s make sure that a minority of voters aren’t de facto installing councilmembers,” he said. “It feels like a victory by default, and democracy isn’t supposed to work like that.”