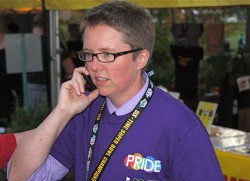 Nearly three-dozen gay bar owners, business people and nightlife promoters aired their concerns about Atlanta Pride and the city’s restrictive licensing and liquor regulations during a sometimes contentious meeting Tuesday. The meeting, which included gay City Council member Alex Wan and officials with Pride, was the second session of a resurgent Bar Owner’s Association, a longtime collection of gay bar owners that at times has fought the city over nightlife issues and is now rebranding itself as Business Owners Atlanta. “The issue of bar involvement is more than a two-year-old issue. It spans back,” JP Sheffield (top photo), executive director of Atlanta Pride, told the group. “I am acknowledging the fact that Pride has not been involved with the bars. It is not something that I look at and say we have done all we can do or that there’s not more work to be done or there’s not legitimate reasons for people to feel like they are not engaged.” Business Owners Atlanta was dormant until September when Matt Neumann (second photo center) – one of the owners of Gaydar, which publishes Southern Voice and David – and officials with his company organized a meeting in early September to air their grievances with Atlanta Pride over the company being excluded from October’s festival. Neumann and Chip O’Kelley (second photo left), who oversees marketing and promotions for the company, lobbied for the creation of an alternative event to compete with Pride, but bar owners pushed to first air their concerns directly with Pride. 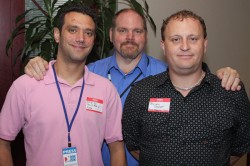 On Tuesday, Sheffield and Pride Board Chair Cain Williamson faced questions about Pride’s staffing and volunteers, its outreach and marketing efforts, how the organization works with small businesses and sponsors, and why Gaydar’s publications were banned from the festival. “My first year at Red Chair, my Pride experience was bad,” said Brad Williams, referring to a restaurant and lounge that he owned in Amsterdam Walk. Williams now owns Jungle near Cheshire Bridge Road. “I’ve never had a connection. There was a big disconnect. I was guilty of not coming to you. This year I did. My concern is that you are saying that you are just one person on this – how do we get past that, more powers, more people working for us,” he said.

Sheffield said that Pride consists of four groups of stakeholders – LGBT people, non-profits, small businesses and corporations – that come together and support the annual festival. Those constituencies, he said, are “all equally important and need to be fostered.” “Are we going to make every single group happy all of the time? Absolutely not. But the goal should be that each individual element feels connected and has the opportunity to get engaged. It’s a delicate balance,” Sheffield said. Prior to the festival in October, Sheffield said the organization – which has one fulltime employee and is overseen by a volunteer board – reached out to past Pride parade participants and market vendors. But a lack of resources has stymied larger outreach and marketing efforts, he said. “To say that we were in financial straits is a serious understatement. The past two years has been Atlanta Pride trying to get its feet back under it and not close the doors. We have to raise $500,000 each year and that is a shoestring budget,” Sheffield said. “We’ve done a good job over the last two years to stop playing defense and play offense again and start doing things like community meetings. In the last two years, we weren’t in a place to do that. We’re not at the Band-Aid point anymore. We’re at the point of let’s have these conversations and recognize that people have been disengaged and that things can be done differently,” he added. Tom Schloeder, who co-owns Brushstrokes with partner Mark Jackson, complained that it’s been more than eight years since a member of the Atlanta Pride Committee has stepped into the retail outlet and asked for them to be involved in Pride. “There is a real lack of communication between Pride and the community in general,” Schloeder said. “Come to the community and say, help us.” 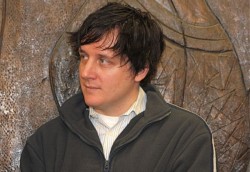 Pride also faces a grassroots effort to return the festival to June. City officials forced Pride and other large-scale festivals out of Piedmont Park in 2008, prompting Pride to shift to the Atlanta Civic Center and an early July date. That shift nearly decimated the annual event. In 2009, the event returned to Piedmont Park but was forced to move the event to late October to meet the city’s restrictions on the frequency of large-scale festivals in the park. In 2010, the event remained in Piedmont Park but was able to shift the dates to early October. Now, a Facebook effort -- Atlanta Pride Belongs in June, organized by popular lesbian DJ Vicki Powell and gay former mayoral candidate Kyle Keyser (third photo) – is lobbying to return Pride to June, the time when the festival was held for much of its 40-year history. Powell and Keyser attended Tuesday’s meeting and asked Sheffield and Williamson to commit to studying the date change. “That’s a big financial decision for the board,” said Williamson, who agreed to raise the issue at the board’s next meeting. Neumann challenged Sheffield and Pride to do more to reach out to small businesses and criticized them for contacting businesses with post card mailings. “I am sorry, but hearing that it is too hard to contact 21 bars? How many times did you knock on the door of Brushstrokes or Poster Hut? A postcard? You send a postcard to an unimportant relative,” Neumann said. “I will do everything I can to help this community – anything to help Pride. There are a lot of people that are passionate about it and want to help. It’s our pride and you are not ordained by God. You are just a business. I am willing to do whatever it takes to help you guys,” he added.

But relations between Pride and Gaydar have been strained for more than a year. Pride would not allow Gaydar to take part in the parade or the market this year after the non-profit organization repeatedly attempted to have O’Kelley and Brian Sawyer (second photo right), Gaydar’s chief operating officer, honor a contract they signed with Pride in 2009. At the time, O’Kelley and Sawyer were two of four owners of Pearl Day, a gay day at Six Flags Over Georgia in September 2009. The group contractually promised $9,000 to three non-profits they named as beneficiaries of the event. But Pearl Day never provided the funds they promised to the beneficiaries, groups they touted in pre-event publicity as they sold tickets to the for-profit event. Atlanta Pride was supposed to receive at least $5,000 in funds – a total that was supposed to reach as high as $15,000 if attendance surpassed certain benchmarks -- money that has yet to be paid to the organization. Shortly after Pride in 2009, Sawyer and O’Kelley were hired by Gaydar and Pride organizers balked at doing business with them again. Robby Kelley, a co-owner of the Eagle, accused Pride of blackballing a business over its hiring practices, a charge that Sheffield denied. “It wasn’t that SoVo and David hired people that were doing deliveries. The COO, Brian Sawyer, is the exact same person that was responsible for executing the contract with Pearl Day. That is who David and SoVo hired to be their chief operating officer. What I said to SoVo and David is it’s in place for 2010. I made calls to Chip and Brian that I really want to work this out before this goes to the press,” Sheffield said. “At the end of the day, I had a contract that I did not get paid and the same person that would be the COO [at SoVo and David] would be signing [a new one]. It was a business decision,” he added. Sheffield said that any business or organization that doesn’t honor a contract with Pride would be subject to “taking a year off.” “The decision to not work with SoVo and David was for 2010. We were clear that the decision we made was for 2010 and that we would sit down and talk with you about 2011,” he said. Bev Cook, one of three longtime owners of the Heretic, told the group that it’s time to move beyond Gaydar’s problems with Pride. “2010 is over. The point is to move forward,” Cook said. “It is time to recognize that it didn’t work well [in 2010] for a lot of people in this room. Be more responsible and get involved.” 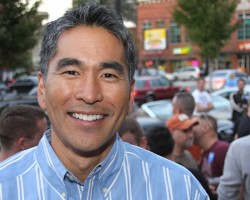 The business owners also peppered Wan (bottom photo) with questions about the city’s bar hours, licensing fees and sales of beer and liquor on Sundays. In 2003, Mayor Shirley Franklin and the City Council trimmed bar hours to 2:30 a.m. from 4 a.m., though the city-owned Underground Atlanta still enjoys a 4 a.m. last call, and forced the closure of 24-hour clubs. Last year, the City Council tabled a proposal to even study the issue and in the past, has batted down efforts to allow city residents to vote on allowing Sunday sales of alcohol in bars. Venues that serve food on Sunday are also allowed to serve alcohol. Earlier this year, bar owners complained on Tuesday, the city also raised its fees for licenses. They told Wan that a lack of 24-hour clubs means that nightlife aficionados all hit the streets at 2:30 a.m. when bars in the city close. If there were venues open later, the bar owners argued, that would provide a place for patrons to sober up and hit the streets in stages. “Back when Backstreet was open and other bars were open 24 hours a day, you don’t have a bombardment. If bars are open 24 hours, it gives that person time to get drunk until 5 in the morning and drink coffee and get sober by 6. The ability to allow people to leave when they want to leave cuts down on DUIs,” Kelley said. Williams said a crush of people leaving bars at the same time strains an already limited supply of taxi cabs. “I think it is a crime that we throw everyone out at 3 o’clock. At 3 o’clock you can’t get a cab at the Jungle and you are putting a lot of drunk drivers out on the road,” he said. Wan, who joined the council in January, said he’s supportive of investigating a return to longer bar hours, but that he needs the help of bar owners to combat the opposition from neighborhood groups and City Council colleagues that put in place the restrictions. “What I will need from you is to help us build up the arguments against the uprising that will happen,” Wan said. “If you had a choice between extended bar hours and Sunday [sales]? Politically it might be easier to get one or the other. Incremental gains can get us where we ultimately want to be.” Kelley said most gay bar owners support being open on Sundays. “Allow us to open up on Sunday like any other day of the week and I’m fine,” he said.