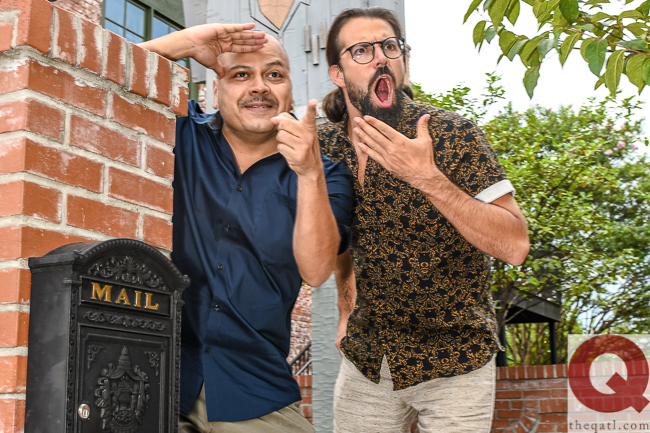 It’s no secret that Johnny Martinez and Brandon Ley have a penchant for good weed. Stuck in the middle of the coronavirus pandemic and a cratering economy, they want to share that enthusiasm with all of Georgia.

The LGBTQ business owners hatched a new passion project as they considered the future of their two businesses, Joystick Gamebar and Georgia Beer Garden, both on Edgewood Avenue. The venues have been closed since March, pushing the pair to consider what the economy will look like on the other side of lockdown.

It’s not a pretty picture.

So the guys combined their love of weed, their savvy at running successful hospitality businesses and their progressive politics to formally launch an effort to legalize marijuana in Georgia.

“Now is the time to push for something different,” Ley said. “Looking at what business means in Georgia, this is something that can help multiple sectors of the economy that were hit hard over the last few months.”

The pair recently launched an online petition calling on state lawmakers to legalize marijuana. Gov. Kemp, please endorse marijuana legalization in Georgia has gained about 700 signatures on its way to what the two men want to be 5,000.

Martinez and Ley said legalizing marijuana in the state will bring in tax revenue at a time when lawmakers are considering slashing the state budget, create a new industry as Georgia grapples with record unemployment, help struggling farmers, and end criminal cases involving marijuana that often disproportionately impact people of color.

The online petition spells it out this way:

• Legal marijuana will give Georgia much-needed tax revenue in our post-COVID world.

• Legal marijuana will provide new jobs to thousands of people in the service industry suffering from unemployment and offer small businesses the chance to transition to a new model.

• Legal marijuana will provide another avenue of income for our agricultural community.

• Legal marijuana will get people out of prison, give law enforcement the chance to pursue real crime, and it would clean up the record for tens of thousands who never deserved this mark. Any legalization should include the commuting of sentences and the expunging of records.

Ley and Martinez want to collect signatures on the petition to build a coalition of groups around the issue so they can lobby lawmakers when the State Capitol reopens sometime in mid-June. Martinez said he’s already talked with lawmakers who are supportive, but they aren’t interested in getting out in front of the issue.

“I am absolutely willing to gear up in masks and gloves and go down to the state legislature and start talking about it. There are people down there who are open to this,” he said.

The issue, though, is going to be a heavy political lift. The state has allowed people with serious medical conditions, including AIDS, to use medical marijuana since 2015. But that legislation took years to pass and only last year did state lawmakers approve permitting the production and sale of medical marijuana within state borders. At least a dozen local municipalities in Georgia, weary of waiting on state lawmakers to take action, have decriminalized the possession of small amounts of marijuana.

Ley and Martinez pointed to Colorado and other states that have legalized marijuana as examples Georgia can follow – and the tax revenue it would raise.

“We don’t have a plan on how they should do it, but there is no shortage of examples of how other states are doing it. There is an appetite on both sides of the [political] aisle for something,” Martinez said.

Legalizing marijuana would create a new industry in the state and could provide jobs to people pushed out of work by the coronavirus pandemic, the business owners said.