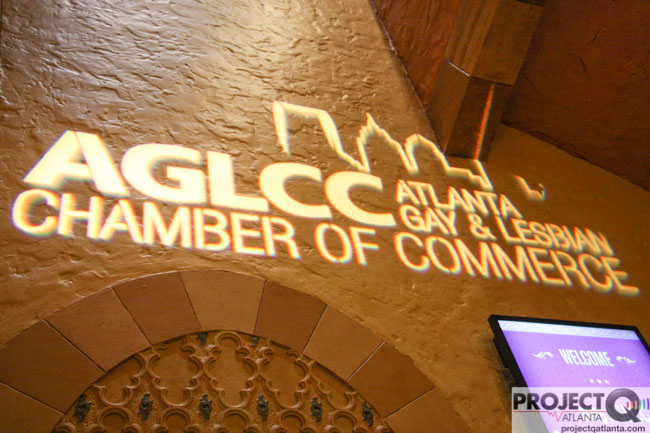 The Atlanta Gay & Lesbian Chamber of Commerce fired its treasurer after accusing him of stealing more than $60,000 from the LGBT business organization.

AGLCC publicly announced the “internal financial fraud” on Friday, a week after it confronted the group's former treasurer, Robby Mathis, with evidence of “multiple suspicious payments” from its bank accounts.

When the board's executive committee confronted Mathis with the allegations on Feb. 23, he allegedly “acknowledged unauthorized use of AGLCC funds” and the board removed him as treasurer. The statement from AGLCC said the funds could total more than $60,000.

But Mathis, a co-founder and partner in the Macon-based Robby Group, told Project Q Atlanta on Friday that the AGLCC statement was a “surprise.” He said he didn't tell the organization that he took the funds.

“I can't acknowledge those statements because they haven't asserted anything,” Mathis said. “I'm working with an attorney to deal with it. We don't have any evidence from them.”

Mathis then referred additional questions to his attorney, who could not be immediately reached on Friday.

In its statement, AGLCC said it turned the incident over to the Atlanta Police Department. An agency spokesperson said Friday that an incident report was not yet available.

“The Board of Directors and I wanted to share this news directly with you – our loyal family – to assure you that we are doing our due diligence to fully right this wrong in a swift and thorough manner,” Jack Kinley, AGLCC's president, said in a prepared statement.

The organization said that despite the missing funds, it has sufficient capital reserves to continue operating. AGLCC said it will pursue repayment of the funds that it alleges Mathis took.

“We are committed to a fair and transparent investigation of this matter and will make additional details available as we are able during this investigation,” AGLCC said.

A spokesperson for AGLCC also could not be reached on Friday.

UPDATE | A spokesperson for AGLCC, Rick Baker, said in a statement provided to Project Q that it's too early to know if criminal charges will be filed in the case.

“Atlanta Gay & Lesbian Chamber of Commerce made a report today to the Atlanta Police Department, and the APD will be investigating the matter.  It is too early to comment on whether AGLCC will pursue criminal charges or if the District Attorney's office will choose to do so after concluding its investigation.  AGLCC's internal investigation is ongoing, and it will consider its options in regard to ensuring the organization is made whole.”

I reach out to you today with disappointing news. We believe we have discovered evidence of financial fraud at the chamber which we are working diligently to assess and recuperate.

Our full statement is available online at https://atlantagaychamber.org/…/d…/AGLCC_Statement_030317.pdf

The Board of Directors and I wanted to share this news directly with you – our loyal family – to assure you that we are doing our due diligence to fully right this wrong in a swift and thorough manner.

Our success hinges on the trust of our members and partners. We honor that trust by being good stewards of the investments that you make in the organization. Unfortunately, an individual in our ranks has broken that trust.

We could allow the acts of one individual to undermine our faith in one another and our resolve to create a fair and equitable economy for LGBT Atlantans, or we can band together as we always have to right the wrongs of the world and advocate for ethical business opportunities for our community.

I continue to believe in the integrity of our business members, our board, and our partners. I hope that with time as additional details are made available and progress towards restoring the damages is made that our family will emerge stronger, wiser, and more committed to the work ahead of us.

Please know that the organization remains financially sound and able to conduct business as usual for the foreseeable future.

We filed a police report late this afternoon. This action now allows us to move forward with an official police investigation. We regret that these formal and necessary steps delayed any earlier communication with you – but we remain available to discuss this matter with you in as prompt a manner as possible.

We will continue to be transparent and provide updates as available. And you are welcome to reach out to us with any questions or concerns by replying to this email or emailing [email protected]

We are eager to restore our losses, protect our members from unethical dealings, gather with you to heal, and of course carry on with the daily realization of our larger mission to advocate for LGBT economic opportunity here at home. 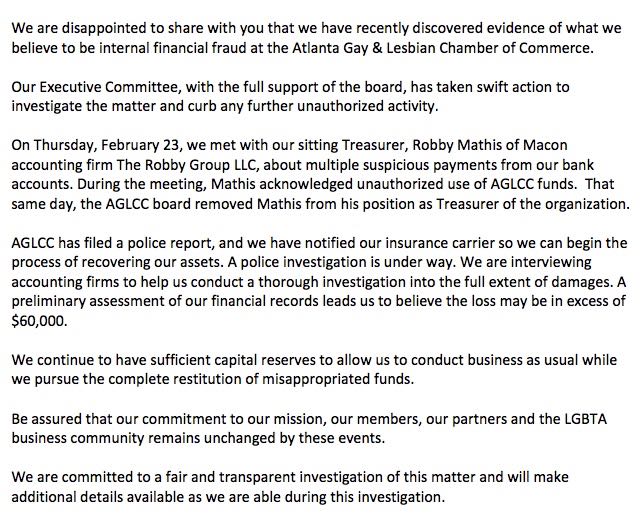