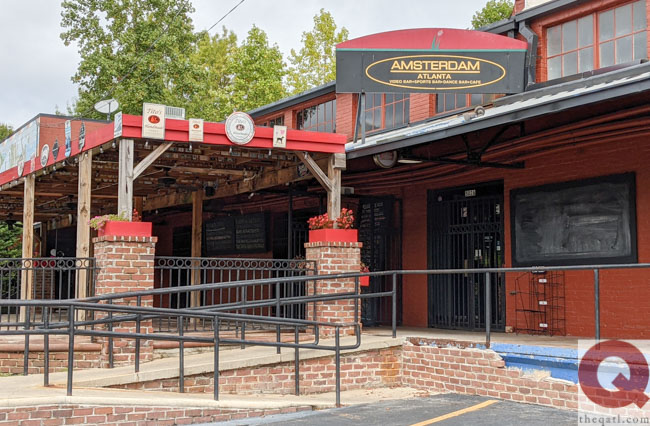 Longstanding gay bar and restaurant Amsterdam Atlanta shut down earlier this month after a large drop in business due to the coronavirus pandemic.

Amsterdam’s owners announced the move on Sept. 6, and its final day was Sept. 13.

“Our lease was coming up in November, and the business just wasn’t what it was after the pandemic,” co-owner Joel Bradshaw told Project Q Atlanta. “Winter’s coming on, and the majority of our business is outside on that patio.”

Bradshaw and co-owner Earl Duffey opened the expansive space in 2005 at the Amsterdam Walk shopping center in Midtown. Numerous drag shows, political fundraisers, LGBTQ sports league parties and other events took place there over the years.

Atlanta Mayor Keisha Lance Bottoms ordered all bars, nightclubs, gyms, movie theaters and other event spaces to shutter due to the pandemic in March. Amsterdam reopened in June, but business was never the same. A staff of 25 whittled down to a skeleton crew, according to Bradshaw.

“The space had gotten too big for us since the pandemic came along,” he said. “The landlord said it wasn’t feasible for them to divide that space off.”

The rise of social media and dating apps also led to a drop in business over the years, according to Bradshaw.

“Atlanta’s not what it used to be,” he said. “People used to go out and enjoy meeting somebody, and now you don’t have to go anywhere.”

Halpern Enterprises owns the Amsterdam Walk, according to What Now Atlanta. Halpern mourned the loss of the venue.

“We regret the closing of any business in one of our properties, particularly a tenant like Amsterdam Café, which has been such a great community asset and enjoyed such a successful run at Amsterdam Walk for so many years,” chairman and CEO Jack Halpern told WNA.

Bradshaw retires after a nearly 40-year career in gay Atlanta nightlife. He worked for 19 years at the Armory and four at Oscar’s before he bought Amsterdam.

“I’m just thankful that we did have a good 15 years. Atlanta’s been good to me,” he added.