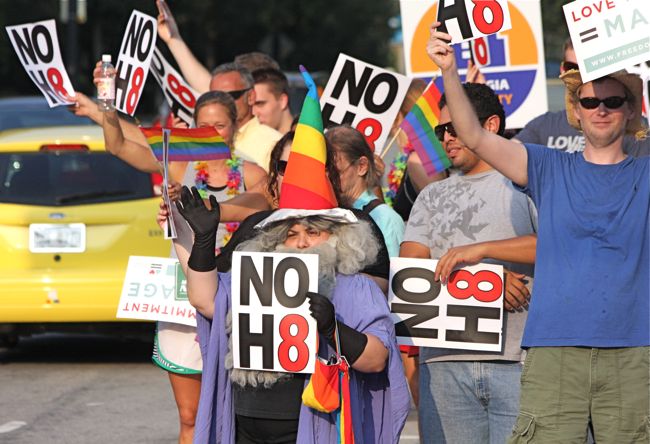 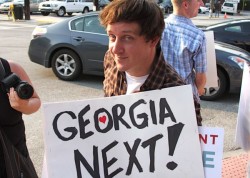 With all of the hooting, hollering and horn honking at the intersection of the 10th Street and Piedmont Avenue Wednesday evening, you’d think that a federal judge had struck down Georgia’s gay marriage ban.

Not so fast. But about 50 people carrying signs supporting same-sex marriage and getting honks of approval from rush-hour motorists were there to celebrate the decision from U.S. District Chief Judge Vaughn R. Walker striking down Proposition 8, the voter-approved gay marriage ban in California. Walker quickly issued a stay of his injunction against Prop 8 as he considers suspending his ruling during an appeal, but rally participants in Atlanta didn’t seem to mind. 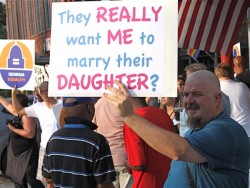 Also on hand were Kyle Keyser (second photo), a gay former candidate for Atlanta mayor, and Joan Garner, a lesbian who is running for the Fulton County Commission.

The effort, organized by the Queer Justice League of Atlanta, served as a taste of what’s to come on Saturday. That’s when the National Organization for Marriage brings its bus tour for bigots, officially called its Summer for Marriage Tour, to Atlanta. It’s part of events in nearly two-dozen cities to rally against gay marriage. The Proposition 8 ruling is sure to fuel their Atlanta effort, which will be just their second stop since Wednesday’s decision. The Atlanta stop is scheduled for 2 p.m. at the State Capitol. 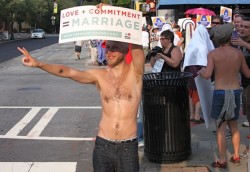 The Queer Justice League, working with Georgia Equality and MEGA Family Project, is responding with the “Love + Commitment = Marriage” rally at 12:30 p.m. in Woodruff Park. They are asking participants to then move to the State Capitol to counter NOM’s effort.

“This rally is a chance for our community to speak on the power of marriage, and why marriage equality is such an important issue,” Jeff Schade, a Queer Justice League organizer, said in announcing Saturday’s event.