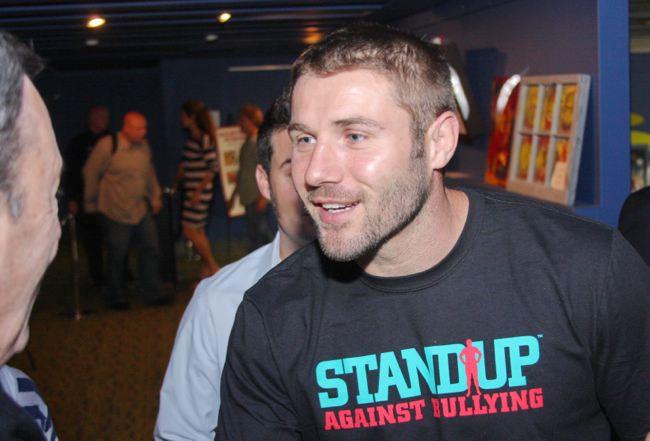 Sexy cuddle bear, gay Atlanta VIP and Bestest LGBT Ally is not gay. Nope, not at all. Not even with his sexy calendars, gay fundraising, sexy underwear and being outed Monday by a British lawmaker. The gaffe came as part-time Atlantan Cohen attended a meeting of ParliOut, the Houses of Parliament's group for gay staffers. John Bercow, the Speaker of the House of Commons, raised the hopes of gay men across the globe with this slip:

“I haven’t had the pleasure of meeting Ben Cohen before but I’m delighted to remedy that serious deficit. “For those of you who aren’t aware, and I’m sure this august and well informed audience will be – his background is as a rugby international – capped no fewer than 57 times for his country”. However, John Bercow was then left embarrassed by his subsequent comment of Cohen being “openly gay” as the MP praised his dedication towards “fighting for gay rights”.

Cohen played it perfectly as the audience laughed, shouting "Don't tell my wife," according to Pink News. Cohen had fun with the outing on Twitter, as did hopeful gay fans.

Funny“@adztbh: @rugbybencohen He should apologise for getting gay hopes up across the world! Heartbroken now haha.”

The retired pro rugby player stops in Atlanta to visit his StandUp Foundation, advance his anti-bullying cause, practice with gay ruggers on the Atlanta Bucks, see a flick or two and work the Atlanta Pride parade. He throws a mean first pitch for the Atlanta Braves, too. How about that other part-time hunky Atlantan Hugh Jackman? Don't ask.