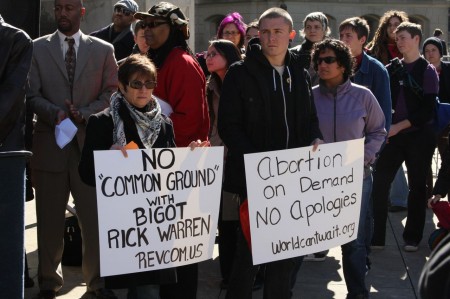 Gay and lesbian activists say they will “peacefully protest” the appearance of Rev. Rick Warren on Monday when he stops in Atlanta to take part in the holiday commemoration of Martin Luther King Jr.

Warren, pastor of Saddleback Church in California, has been the subject of controversy since President-elect Barack Obama selected him to deliver the invocation during the inaugural on Jan. 20. Then news surfaced that Warren, who supported the anti-gay Proposition 8 in his home state and made unflattering comments about gay men and lesbians, would headline the Martin Luther King Jr. Annual Commemorative Service at Ebenezer Baptist Church in Atlanta on Jan. 19.

Late last month, the Atlanta Black LGBT Coalition asked the church to rescind its invitation. On Monday, they formally announced their plans to protest Warren’s visit outside the church on Auburn Avenue. The coalition called Warren’s selection as the keynote speaker “an affront to the King legacy and all that he labored to achieve.”

“Warren not only compares women having an abortion to Nazis, and pro-choice supporters to holocaust deniers, but he also opposed the right of lesbians, gays, bisexuals, transgender and queer folk to marriage, as well as [admittance] to his church,” said Craig Washington, a founding member of the coalition.

Warren “preaches a message that is dated, harmful and dangerous about our bodies, our sexualities and our communities,” said Paris Hatcher (bottom photo), a black lesbian activist and co-executive director of SPARK Reproductive Justice NOW. “As members of King’s beloved community, we say that all communities are sacred. And at times like these, Atlanta needs to hear a message of love and liberation that affirms everyone, not a narrow opinion that reinforces the dialogue of oppression and shame.”

The Jan . 19 protest begins at 9 a.m. at the intersection of Jackson Street and Auburn Avenue, which is across from the church. (Participants will meet at 8:30 a.m. in a staging area at the corner of Edgewood Avenue and Jackson.) Other progressive groups, including the newly-formed GLBT ATL, are expected to take part in the event, which ends at 10 a.m.

Warren is scheduled to speak during a 10 a.m. service. The church said it invited Warren in part because of his work with other evangelicals to solve social problems including poverty.

After the protest, participants are invited to attend the annual Atlanta Bayard Rustin-Audre Lorde Breakfast. The event is set for 10:30 a.m. at 139 Ralph McGill Blvd.

At 12:30 p.m., the activities shift to Peachtree and Ellis streets to take part in the annual Martin Luther King Jr. March and Rally, which steps off at 1 p.m. Michael Brewer, co-president of Safe Space at Morehouse College, is scheduled to speak at a rally at the conclusion of the parade. (For additional details, view the day’s Facebook page.)

The Monday morning protest is gaining traction among local media outlets, including Southern Voice, the Atlanta Journal-Constitution and WSB-TV.