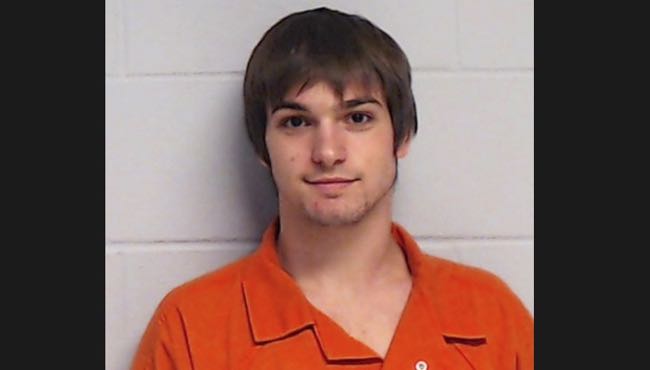 Hylan Anthony Taylor, 22, – who performs in gay sex films as Johnny Rapid – was arrested on Dec. 15, more than two months after he allegedly attacked his girlfriend and mother of his child after an argument outside a bowling alley near Flat Shoals Road in Rockdale County.

Taylor was charged with misdemeanor battery. He was released a day later from the Rockdale County Jail on $2,500 bond, according to the News, which reported the incident on Sunday. A court date has not been set.

During an Oct. 9 trip to a bowling alley, Taylor asked his girlfriend, Angie Lynn Blankenship, to pursue a young woman he spotted for a threeway, according to an incident report from the Rockdale County Sheriff's Department. But Blankenship protested when the girl said she was just 14-years-old.

But Taylor insisted on setting up the tryst with the underage minor, according to the report.

Blankenship walked out of the bowling alley and Taylor followed. He became enraged when she wouldn't have sex with him and the minor and allegedly grabbed Blankenship and started to choke her and then knocked her to the ground.

Then they both got into a vehicle together and left, though they continued to argue as Taylor drove, according to the incident report. They stopped at what appears to be the home of Taylor's mother on Irwin Bridge Road and continued to argue.

She stated that while at that location they continued to have a verbal argument to the point where she stated that he was asking his mother for a gun.

Taylor then left to possibly return to the couple's home on Dover Road in Oxford, which is in neighboring Newton County.

The physical confrontation left Blankenship with injuries on her lips, swollen eyes and a bloody right ear where her earring was ripped out, according to the incident report.

As a deputy waited for Taylor's possible return to his mother's residence, Blankenship asked the deputy to disregard the entire incident.

While sitting in the driveway with my lights off, Ms. Blankenship walked up to my vehicle and attempted to get me to forget the whole thing that she was lying, that she made the whole thing up. I then advised her that no matter what she said I was not going to change what was going to happen; that the report would be filed in charges in reference to Battery (FV) would be brought against her boyfriend.

Rapid has been a prolific performer in gay sex films, shooting more than 100 scenes mostly for Men.com. A NSFW rundown of his filmography tracks his four-year career. Last week, Rapid and Men.com offered $2 million to entertainer Justin Bieber to film a sex scene with him. Taylor, a high school wrestler, graduated from Rockdale County High School in 2010, according to the News.

In an October interview(NSFW), Rapid admitted that he likes to dominate women during sex, choke his female partners and “have sex with her until she bleeds.” In his gay sex films, Rapid is a power bottom.

It was so satisfying to see a picture-perfect Pride Weekend in Atlanta take shape. This issue of Q ATLus celebrates with a supersized section...
Read more
Arts & Culture