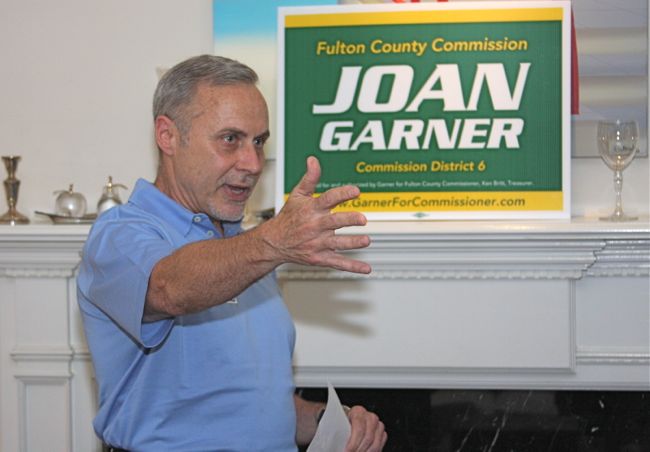 Longtime gay Atlanta politico Ken Britt -- a behind-the-scenes player in local campaigns and national LGBT groups -- said on Wednesday that he wants to become Georgia’s fifth openly gay member of the state legislature. Britt said he’s running for the District 56 seat, the Midtown district occupied for more than 20 years by state Rep. Kathy Ashe -- a gay-friendly Republican turned Democrat who announced last week that she’s retiring and won’t seek re-election this fall. “I have been encouraged to run for this office, and I would be honored to serve the people of the 56th District in the Georgia House of Representatives,” Britt said in a prepared statement. “This would be a natural next step for me given my lifelong engagement in local, state and national politics. The new district includes great Atlanta neighborhoods with big plans and big needs. I look forward to using the extensive business experience I acquired working as the executive director of one of the nation’s largest and most respected law firms, as well as the passion of an activist, to make things happen.” Britt, an Atlanta resident since the early 1960s, has lived in the legislative district for the last 15 years. In 2009, Britt retired as the executive director of the Alston & Bird law firm. In August, Britt helped the Gay & Lesbian Victory Fund celebrate its 20th anniversary by taking part in a video series discussing how the group has helped the local political campaigns he’s worked on. Britt, whose honors range from Georgia Equality’s Phillip Rush Community Builder Award to Pride parade grand marshal and the Fenuxe 50, was a key player in the historic elections of Alex Wan to the Atlanta City Council and Joan Garner to the Fulton County Commission. Wan and Garner received Victory Fund endorsements. Britt is also the vice chair of the LGBT Caucus of the Democratic Party of Georgia. From the press release announcing his campaign:

In 2009, Britt served as Chairman of Alex Wan’s successful Atlanta City Council race, and as Treasurer and Campaign Advisor for Joan Garner’s election to the Fulton County Commission in 2010. Britt was a member of the 2010 Coordinated Campaign Committee for the Democratic Party of Georgia, which was chaired by former Atlanta Mayor Shirley Franklin. During the 2011 Georgia legislative session, Britt served as a full-time legislative volunteer which provided him with the opportunity to hone his advocacy skills while further learning first-hand about the inner workings of the legislature. He serves on the Board of the Community Foundation for Greater Atlanta; the Georgia Democratic Party State Committee; and as an Ambassador for the Center for Civil and Human Rights. Britt is also a member of the Atlanta AIDS Partnership Fund, a collaboration of the United Way and the Community Foundation for Greater Atlanta, where he has helped to ensure funding for HIV prevention activities that impact minority women and youth. He was most recently appointed to serve as a Community Liaison Representative for Congressman John Lewis’ 2012 re-election Campaign. Britt formerly served on the Boards of the Midtown Alliance, CHRIS Kids, AID Atlanta, The Atlanta Opera, the Human Rights Campaign, and Georgia Equality, among others. He was also Vice Chair of the Human Relations Commission of the City of Atlanta. He is a graduate of Leadership Atlanta (1996) and of the Midtown Leadership Program (1993). Britt is a Veteran, having served in the U.S. Army from 1970 to 1973. In March 2011, Britt was recognized for his community service by the Georgia House of Representatives with Resolution 647. He also is the recipient of CHRIS Kids’ CHRIStal Vision Award (2010) and, at the time of his early retirement from Alston & Bird, was honored by that firm with the establishment of the Kenneth F. Britt Award for Community Service (2009). Some of the other awards Britt has received include the Center for Democratic Renewal, Angel for Justice Award (2005); the Association of Fundraising Professionals, Georgia Volunteer Fund Raiser of the Year (2001); the (first) AID Atlanta Kenneth F. Britt Annual Honors Service Award (2000); and the Human Rights Campaign Dan Bradley Humanitarian Award (1999).