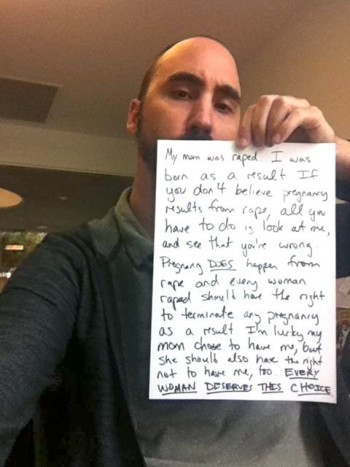 With the debate over “legitimate rape” still boiling, gay Atlanta man Thomas Lofton McLean was pushed to action. So he came out on Facebook with a powerful message: “My mom was raped. I was born as a result.” McLean’s post quickly gained attention and support from friends. Then media attention. Gay journalist Rich Eldredge dug into McLean’s story in a Thursday column for Atlanta magazine, Putting a public face on the rape debate – his own. McLean spent his week following the fallout since U.S. Rep. Todd Akin made his now-infamous remarks on Sunday describing how a woman’s body has natural defenses against pregnancy stemming from “legitimate rape.” A day later, Rep. Steve King chimed in, allowing that he’s not aware of young victims of statutory rape and incest becoming pregnant. That, McLean explains, was enough. He reacted with a photo of him holding a note: “My mom was raped. I was born as a result. If you don’t believe pregnancy results from rape, all you have to do is look at me, and see that you’re wrong.” He also posted an explanation with the photo.

I'm disgusted I have to do this (though I'm not ashamed). I'm disgusted there's people serving on our national board of Science and Technology and our government who make decisions about womens' bodies without being aware of the health issues of those women. I'm disgusted that rape happens in the first place. So Rep. Steve King, here I am: evidence that pregnancy happens from rape, and I support the ability of every woman raped to determine what happens if pregnancy results.

McLean went further in his interview with Atlanta magazine.

While McLean's Facebook friends who are sharing his post continue to laud his bravery, he dismisses the notion. "I'm not brave," he says. "I had absolutely no say about coming into this world. For me, the women like my mom who go through this, who are traumatized and violated in mind and body, having to make a tough choice and live with this everyday, they're the brave ones."