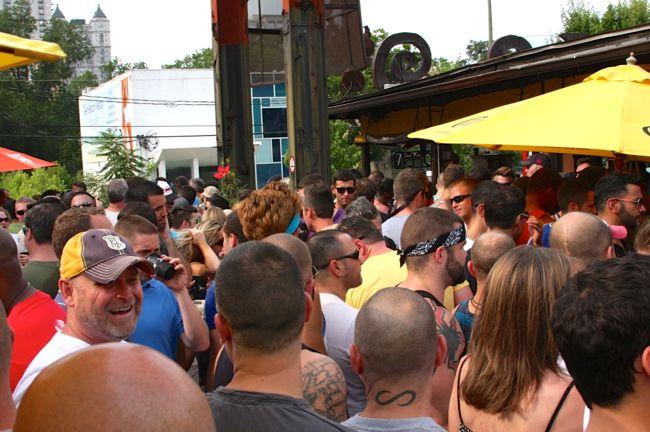 When we claimed that you probably shouldn't date gays from Alabama (or Mississippi), we caught flak. Lots of it. But now a reader has our back, arguing that it's gay transplants from small towns that make gay Atlanta so damn cliquish.

Finding gay community in Atlanta can be tough. Some gay socialites have sworn it off, claiming that it's like a trip through your high school cafeteria. Chazz emailed us to share his thoughts on the cliquish feel of the gays who cocktail.

Here is what is amazing to witness in midtown Gay-lanta.

Clique. That word is often used is high school: nerds, cheerleaders, jocks, band geeks, etc. think back and you will recall how each clique sits with each other. Never talking to the other. Each clique stuck to itself and protected one another. Each group was more or less a private club that had strict requirements for entry. Psychologists, sociologist, educators, counselors, etc., have produce numerous reports and studies showcasing how these cliques cause harm to others.

As a resident of midtown, I often hear sad stories from gay men who come from small towns or from very conservative areas. They mention how being gay in these areas was hurtful and cause much ridicule. Being called all sorts of derogatory terms. To escape the cliques and the ridicule, they decide to move to midtown Atlanta or surrounding areas since they are seen as more progressive than the small towns from which they leave. Seeking to be part of the gay clique is important as they seek acceptance and support.

The small town gay man makes his way to the big city of atlanta. As one walks streets of the area, looking left, right, and forward, you can see twinks or bears or cubs or others strutting by. They all walk with an air of arrogance. All talking as if they are better than the others. Seeing all this reminds me of cliques. Except these cliques are more obnoxious than the ones in back in high school.

Just go to any gay bar: Blake's, Ten, Burkhart's, 10/P, Eagle, etc., and you will see the cliques in action. Each group gathered around and talking to one another. Now, try going to talk to the cliques and you are not part of them. They will look at you with distaste in their eyes and their nose high in the air. Then, as you leave, they will turn to each other, whisper and made crass comments.

Recently, I met a very nice guy from Alabama. To protect him, I will refer to him as "Brian". Brian has a clique that involves himself, a friend named "Moe", and lots of other gays. Brian has no problem talking to me and my friend when his clique isn't around. He will joke, carry on, and have a grand time. However, when Moe and his other friends are around, Brian will not even look in my direction. He won't talk or acknowledge the presence of my friend or me. But as soon as he is alone, Brian will come on over and talk. This behavior disgusts me.

So, what has happened? These small town gays who ran because they couldn't be accepted, have now become the embodiment of what they hated and could not stand. They have now become the "mean girls". The joy of treating others how they were treated brings them complete happiness. Now, here's what makes it worse.

I belong to no clique or group. I am my own person who interacts with several people. I am friendly and converse with anyone. Hopefully, setting the example and letting people know that it's okay to talk to others is crucial. Our community is so fragmented, especially in Atlanta. Talked to any gay who is from a other city and state. The consensus is that Atlanta gays are the most arrogant and obnoxious. To them, I often say, ask these arrogant and obnoxious gays where they are from. As a local who was born and raised here, I can tell you it's not us to whom these out of towers refer.

So, no matter where you are from and no matter your clique or association, you all need to friendlier, kinder to all gays. Don't assume that just because a gay talks to you, [he wants] in your pants; don't think so highly of yourself. Remember those who have treated you poorly in the past and stop inflicting the same onto others.