Gay Atlanta gets what it means ‘To Be Takei’ 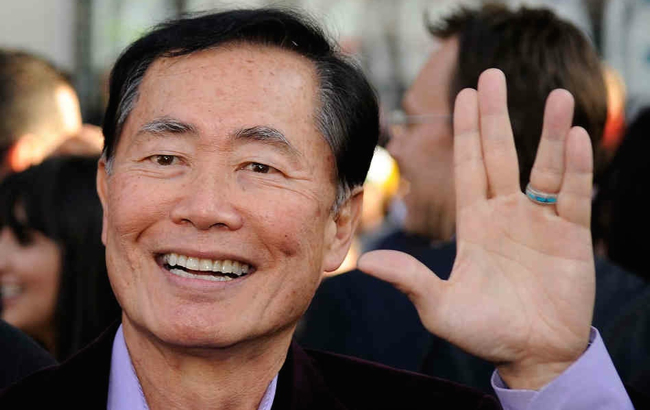 He became a household name as part of “Star Trek,” but George Takei has arguably become even more popular as a latter day gay activist and an internet darling. A documentary on his life, “To Be Takei,” screens Wednesday as part of Stonewall Month courtesy of Atlanta Pride and Out On Film.

Takei’s life went from inside a WWII internment camp to playing Sulu as part of the Starship Enterprise. In more recent times, his coming out led to becoming a gay rights activist and subsequent marriage to his partner of 25 years, Brad Altman. All of it led to a pop culture phenomenon that includes Takei as a Facebook guru with more than five million fans who feast on his humorous, frequent commentary.

“To Be Takei” director Jennifer Kroot has always been a Takei follower and became so taken with him that she decided to make a movie.

“I didn’t know George or Brad, but I was a ‘Star Trek’ fan,” she says. “I was charmed and impressed and inspired when I heard George at the age of 68 had came out and was speaking to the media. I loved the way he gracefully did that after living a publicly closeted life. I read his autobiography about his experiences, became obsessed with him and reached out to his agent.”

The first meeting between the three was at the couple’s house after Kroot got the stamp of approval from Takei’s management.

“I got a little sense of their dynamic, the way Brad really micromanages all the details in George’s life,” she recalls. “There was a lot of friendly bickering. I thought it would be great to show their level of comfort.”

By that time, Takei had already started “the Facebook thing” and other projects like his Broadway-bound play “Allegiance,” a musical about the Japanese-American internment camps in the U.S. during World War II. Trying to keep up with him was an adjustment, she says.

The film eventually took three and a half years, although the last year was spent editing. Kroot laughs that she had no idea it would take that long.

The film has screened in several places since its debut at Sundance earlier this year. Regardless of age, sexual orientation or location, Kroot says that people respond positively to the icon and phenomenon that is Takei.

“Everybody who has a sense of humor likes George,” she says. “Anyone who has felt like an outsider in one way or another does as well. The way he faces obstacles is an inspiration to people. He shows the ways you can do it and deal with that head on. He is meaningful to a lot of people.”

There are some big laughs in the film, especially as Takei looks at his early career and responds to current-day critics and anti-gay folks. It also includes some sadder moments, such as when Takei talks about his childhood years and his family in scenes shot on college tours and before Congress.

The director interviewed several people for the film, including “Star Trek” castmates William Shatner – who trades barbs with Takei about whether he was or not wasn’t invited to his wedding – and Leonard Nimoy. Howard Stern is someone who doesn’t grant many interviews, but because Stern is fond of Takei, the radio personality made an exception for the film.

You don't have to wait until August with Wednesday's special screening in Atlanta, but you may get a second chance then. “Takei” gets a full-throttle theatrical release at the end of summer, and that part was a pleasant surprise for the director.

“You have to go in thinking the best,” Kroot says, aware that getting a release is not automatic.

She knows of what she speaks. Her earlier film “It Came from Kuchar” is an adorable documentary about legendary – and openly gay – underground filmmaking twins George and Mike Kuchar. It was a huge hit on the LGBT circuit in 2009 and helped paved the way for “To be Takei.”