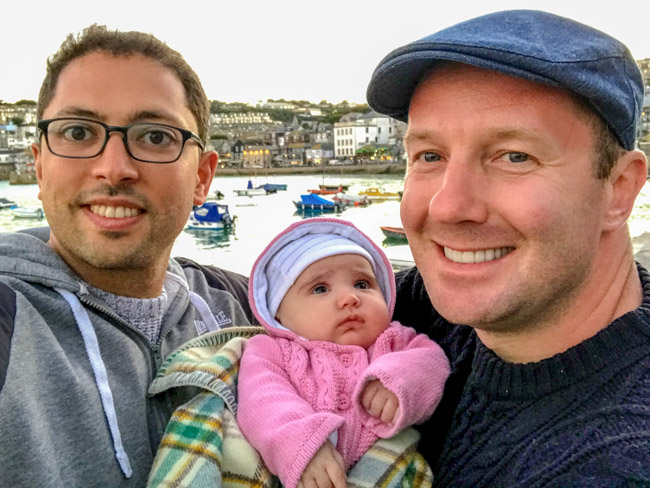 A gay Atlanta couple found themselves the victims of an outdated State Department policy after their British-born daughter was denied citizenship in April.

James Derek Mize and Jonathan Gregg met in 2014 and married in 2015. A close friend, who is British, served as their surrogate, and daughter Simone (photo middle) was born at a British hospital in 2018, according to the New York Times.

They applied for citizenship for Simone and received a letter from the U.S. embassy in London saying that Gregg (photo left) — who lived in Britain for most of his life before moving to the U.S. to be with Mize (photo right) — didn’t have enough years in America.

Mize said the situation is “shocking,” according to the New York Times.

“We’re both Americans; we’re married,” Mr. Mize said. “We just found it really hard to believe that we could have a child that wouldn’t be able to be in our country.”

Mize, a former lawyer, and Gregg, a management consultant, are ensnared in a State Department policy that requires a child born abroad to have a biological connection to an American parent in order to receive citizenship at birth.

The State Department classifies some children born through assisted reproductive technology as “out of wedlock,” according to the New York Times. That triggers a higher bar for citizenship.

Opponents of the policy, which dates back to the late 1990s, argue that it no longer aligns with the current societal understanding of — and legal definition of — marriage. There are several lawsuits filed against the State Department over the policy.

The policy gained renewed attention after both the New York Times piece and a Daily Beast story profiled same-sex couples swept up in its wake.

Mize said it was “psychological trauma” to have Simone’s U.S. citizenship denied, according to the New York Times.

“When we went to the embassy and they said, ‘You’re not a family, you’re not married and, Derek, you’re not her father,” he recalled, “it was just like a flood of every emotion I’ve ever had since I was first called a faggot came rushing into my body.”

Mize and Simone, who is now 11 months old and has a tourist visa, travel back and forth to Britain. Mize is worried that the situation is disrupting Simone’s development, and he’s unsure what’s going to happen if it’s not resolved, according to the New York Times.