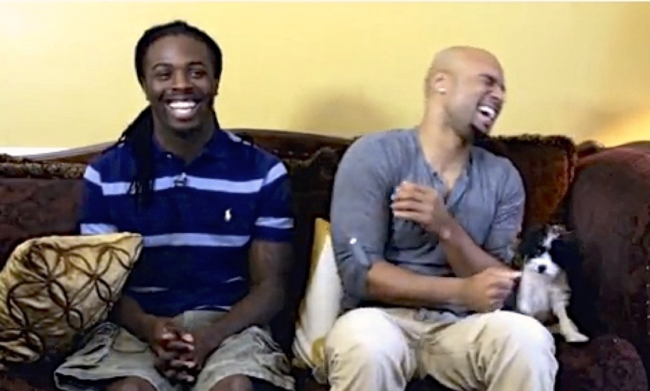 With all the negativity and crazies in the world, it’s always nice to bask again in the glow of Kordale and Kaleb, the local dads and Instagram celebrities who we love seeing stretch their 15 minutes of fame with developments in their publicly private journey.

On the heels of stealing more hearts and setting more tongues atwitter in their national Nikon commercial, Kordale Lewis and Kaleb Anthony and their three children are ready to up the ante on their adorableness and their public appeal: A fourth child, according to a new interview (video above) with TheGrio. But first, the media-darling “Black Gay Dads” review how they got the first three.

“I was in a relationship with one girl only, and it was the mother of our children,” Kordale revealed. “At 16, we had sex, and she got pregnant. I didn’t know the first child was mine, because we really weren’t together like that. Desmiray was born when I was 17 years old.”

Soon, Kordale had a second child and an unexpected third, all by the time he was 19 years old.

He remained active in his children’s life until one day, when he was 22 years old, he got a phone call to come pick up his kids, and ever since, he and Caleb have had full custody.

Sound like gay drama? K&K hope Hollywood – and you – think so too. You can help by joining the couple's new $500,000 Kickstarter campaign to put their very watchable lives into a movie version of Lewis’ book “Picture Perfect?”

But what this movie needs is a heartstring tugger: And baby makes six.

The couple currently are domestic partners and plan to wed as soon as gay marriage is legalized in the state of Georgia. In the meantime, Kodale and Kaleb plan on having a fourth child.

“Kordale and I have been planning to have a child. Our first child together,” Kaleb said. “It’s a little process called artificial insemination. We have a young lady, and she is going to do it for us.

It’s a lot, but we bet they can handle it – what with the experience of the Atlanta's Pride parade, the book, the NOH8 photo shoot, the multiple interviews, and of course the notoriety from the photo that started it all.