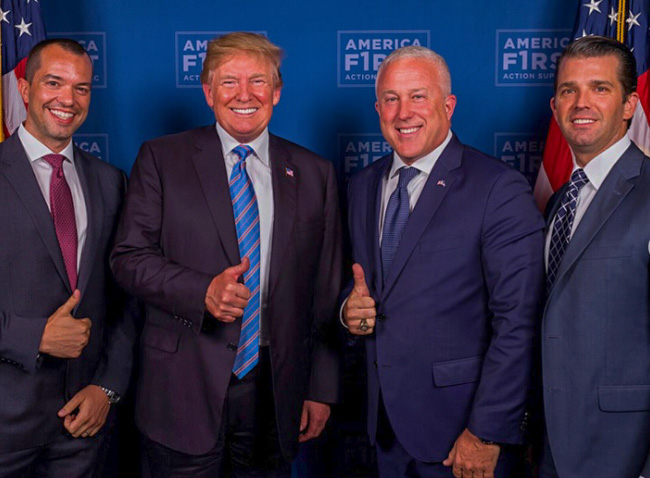 A gay Atlanta couple who once strongly supported Hillary Clinton and Barack Obama is now planning a $5 million fundraiser for Donald Trump and crowing about having the phone numbers of the president’s sons on speed dial.

Bill White and his husband Bryan Eure also attended a Trump rally for Brian Kemp in Macon in November and spoke out about Stacey Abrams’ “radical extreme socialist agenda” after she lost the Georgia gubernatorial election.

“He’s not a politician,” White (top photo, second from right) told the New York Times about his support for Trump. “He’s not going to configure himself as anything other than what he is. I think that he has an authenticity.”

The couple – who split their time between a Buckhead home in Atlanta and New York City – said they flipped their support from Clinton to Trump on Election Night in 2016 as soon as they realized Clinton would lose.

The genesis of the couple’s reversal can be timed to about midnight on Nov. 8, 2016. Inside the Jacob K. Javits Convention Center in Manhattan, at Ms. Clinton’s election night event, Mr. White stood watching the returns in an increasingly funereal atmosphere.

He got in his Chevrolet Suburban and drove to the New York Hilton in Midtown, where Mr. Trump was celebrating his win.

“I didn’t want to be part of that misery pie; I’m not a wallower in self-pity,” said Mr. White, who now runs Constellations Group, a strategic consultancy firm. “I really believe that once that decision is made, you have to get behind your president.”

But they also point to a pair of slights by the Clinton family as motivation to switch their support, according to the New York Times.

Eure said the couple borrowed a friend’s helicopter and traveled through a windstorm from the Hamptons to watch Hillary Clinton speak at the Democratic National Convention in Philadelphia.

But as the couple rushed to say hello to the candidate, a staffer blocked them.

“This was about because we didn’t write a $25,000 check” in the final stretch of her campaign, Mr. Eure said.

White said he saw Chelsea Clinton at a Manhattan bar earlier this year.

Offended that she failed to acknowledge him, Mr. White said, he whipped out his phone and dialed Donald Trump Jr. “He said, ‘Do you want me to come over? I’m at the office, do you want me to?’”

Mr. White added: “Trump picks up on the first ring. If you want to get to Chelsea Clinton, you have to call through five people.”

The couple brushed off condemnations from LGBTQ people who note Trump’s rolling back of LGBTQ protections since taking office.

Eure also pointed to Trump’s appointment of Richard Grenell, who is gay, as ambassador to Germany.

The couple got pictures with President Trump backstage after Trump’s rally for Kemp in Macon on Nov. 4 – just two days before the gubernatorial election.

The day after the election, Eure congratulated Kemp on Instagram, saying, “So proud of @briankempga and his family for running a tireless campaign against outside interest groups/Oprah/Hollywood/Obama and beating Stacey’s radical extreme socialist agenda — grateful to Georgia for making the ‘right’ choice.”

The couple told the New York Times that they will host a $5 million for Trump this winter.

#TBT to earlier this summer in regards to my post made right after the election – sadly the mass hysteria hasn’t waned (and is becoming more desperate and ridiculous) despite the tremendous success @realdonaldtrump has had since taking the oath of office just 20 months ago – short answer: yes I support our President now. I prefer results over rhetoric. Long answer: Why? We already have a 4.2 GDP, massive tax cuts, 4mn jobs created, unemployment down, stock market way up, killed TPP, renegotiating NAFTA and other trade agreements, allies of NATO on way of paying fair share, Judge Gorsuch and Kavanaugh, military finally funded adequately, Comey and other swamp things drained, Veterans Affairs being cleaned up, focus on opioid crisis, fierce First Lady, North Korea hostages and remains of US soldiers released while denuclearization underway, US Embassy in Israel moved as promised by last 3 Presidents, Iran deal thrown out, strong border security, etc. etc. etc. and all of our general overall quality of life has increased because of the booming economy which he and his administration are responsible for turning around – all while dealing with a fake “Russia collusion” narrative and an angry/bitter/hostile main stream media environment that spreads lies under the “unnamed sources/anonymous” excuse. Grateful to our friend Ric Grenell, who was appointed by President Trump as Ambassador to Germany����!, (and recently deported, with ICE, the last living Nazi in America back to Germany), for introducing us to President Trump @realdonaldtrump and @donaldjtrumpjr #MAGA #TRUMP2020 #KeepAmericaGreat #KAG ������������������������

Congratulations to the new First Family of Georgia!!! So proud of @briankempga and his family for running a tireless campaign against outside interest groups/Oprah/Hollywood/Obama and beating Stacey’s radical extreme socialist agenda – grateful to Georgia for making the “right” choice ������Thank you @realdonaldtrump for rallying for Kemp – made all the difference! #MAGA ��❤️����