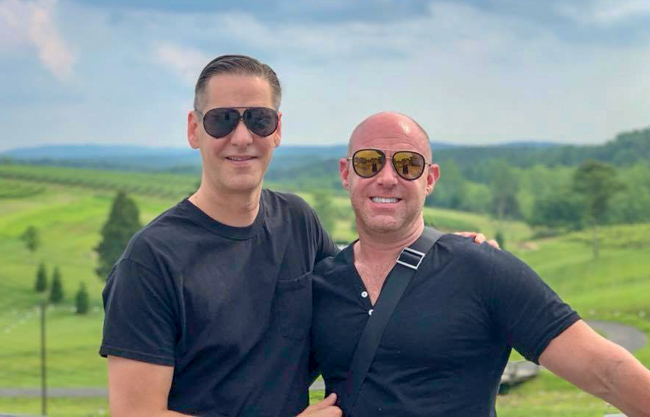 A gay Atlanta chiropractor is facing scrutiny for financially supporting Republican gubernatorial candidate Brian Kemp – the same man who as Georgia Secretary of State regulates the massage clinics he owns that have faced a series of sexual assault complaints.

Dr. Patrick Greco and his partner Jimmy Stanton (top photo, right to left) hosted a fundraising gala for Kemp’s campaign at the Honeymoon 1851 Mansion, their antebellum estate in Madison about 60 miles east of Atlanta, and donated $1,000 to his campaign, according to the AJC. Kemp supports anti-LGBTQ “religious freedom” legislation and has criticized LGBT-inclusive non-discrimination policies as efforts by “the radical left and politically correct.”

Greco owns two Massage Envy clinics, one of which is in a Ponce de Leon Avenue shopping center across from Ponce City Market. And that’s where things get problematic for Kemp, who is Greco’s industry’s highest-ranking state regulator.

Meanwhile, the two Massage Envy clinics Greco owns face at least four allegations of therapists groping women during massages. The Board of Massage Therapy, under Kemp’s purview, looked into one woman’s complaint, but none of the accused therapists’ licenses has ever been sanctioned or revoked.

Greco and Massage Envy are also the subjects of a lawsuit from clients accusing therapists at the clinics of sexual assault.

Supporters of Kemp's opponent – Lt. Gov. Casey Cagle – have turned Greco's donations into a campaign flap as the two men face each other in an increasingly bitter GOP primary on Tuesday. Atlanta attorney Simon Bloom has reportedly filed an ethics complaint against Kemp and his campaign over this and eight other donations he argued appear to be conflicts of interest.

“You can’t curry favor with your wallet in elections when you are directly regulated by that person,” Bloom told the AJC.

Kemp declined comment to the AJC but his spokesman said the campaign’s legal and compliance team approved the donations. That’s possibly due to a legal loophole in Georgia’s campaign finance law that prohibits donations from regulated companies, but permits donations from individuals at those companies.

The Kemp campaign would not disclose how much Greco’s fundraiser generated, and Greco didn’t respond to requests for comment from Project Q Atlanta. Massage Envy said in a statement to the AJC that it cannot comment on the specifics of investigations.

Critics of Kemp have called for federal and state investigations into the donations from Greco and those he hosted at that April fundraiser.

“There appears to be a direct connection between campaign support from Massage Envy franchisees in exchange for non-action and suppression of these horrific, repeated and ongoing cases of sexual assault,” Unterman said in her letter to Pak.

The Kemp campaign claimed the clinics aren’t under Kemp’s purview.

In a statement, spokesman Ryan Mahoney said it was up to Carr and board members appointed by Gov. Nathan Deal to hold licensees accountable, not Kemp. But he does hold sway over dozens of licensing boards’ ability to conduct investigations, since their investigators, executive directors and support staff are all employees of the Secretary of State’s Office.

“It is our hope that, for her own sake, she will retract these baseless, politically motivated statements before facing serious legal action,” he said. “We also hope that Senator Unterman will seek immediate medical attention before she hurts herself or someone else.”

This led Unterman to post on Facebook the following day about battling depression during a divorce and how her son committed suicide “due to mental illness.”

So Brian Kemp, who wants to become our state leader, you can make fun of me and belittle those who have had or will have mental illness, but you won't shut me up for speaking out. I won't be intimidated, blackmailed, belittled, or sexually harassed into being quite. I will always speak out for the little person, the underdog, and the disadvantaged.

One of the primary factors that prevents many people from seeking professional help with issues like depression or addiction, is the stigma that Brian Kemp's campaign spokesperson perpetuates. Shame on you!

The bruising nine-week GOP primary runoff between Kemp and Cagle comes to an end on Tuesday. The winner will face former House Minority Leader Stacey Abrams in November.