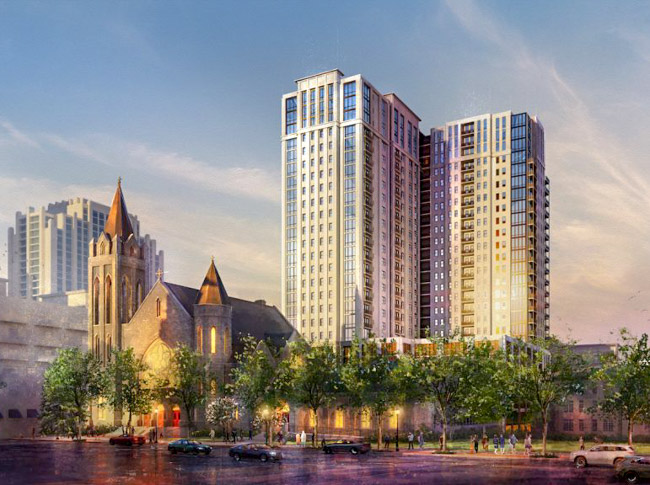 StreetLights Residential presented the plans to Midtown’s Development Review Committee on Aug. 13, according to What Now Atlanta. Saint Mark’s is selling the land to StreetLights for about $10 million and they hope to close the deal by the end of the year, according to senior pastor Beth LaRocca-Pitts.

“It will be an apartment tower with a parking deck, of which Saint Mark’s will own 150 parking spaces,” she told Project Q Atlanta. “There will be a connecting bridge from the parking deck into our building for handicap access and other things.”

Saint Mark’s presently has only about 60 parking spaces.

The tower at 121 5th Street would include nearly 300 apartments on 19 floors plus a seven-level, 568-space parking deck below the residential floors, according to What Now Atlanta.

The sale would be the culmination of a process that started in 2007, when Saint Mark’s was looking for more parking options. They traded and bought property to the point that they owned most of the block, according to LaRocca-Pitts.

“The church’s original intention was to tear the houses down for surface parking until it was discovered that the city code didn’t allow that,” she said. “So we couldn’t have the parking lot that we wanted. Then the stock market fell apart.”

In 2013, Saint Mark’s leased a 7,000-square-foot former office building on the property to Lost N Found for $1 per year. The LGBTQ homeless youth group gutted the house in 2014 and launched a $1 million capital campaign to complete the renovation, but Saint Mark’s changed course in 2016 and decided to turn the property over to a developer.

“The arrangement with Lost N Found was an effort to save one of the homes, but we soon found out it was not economical to develop on the remainder of the property,” LaRocca-Pitts said. “We needed the whole parcel, so that’s when we arranged with Lost-n-Found to reimburse the money to them. At closing we will be reimbursing Lost N Found any money spent on the rehab of the house.”

Saint Mark’s will also use money from the sale to pay off its mortgage, pay legal and real estate consultants and make repairs to the church.

“Our building is 100 years old, so there’s always something to repair,” LaRocca-Pitts said.

She said the developer wants to break ground on the tower around March and that the project will take 18 months to two years to complete.