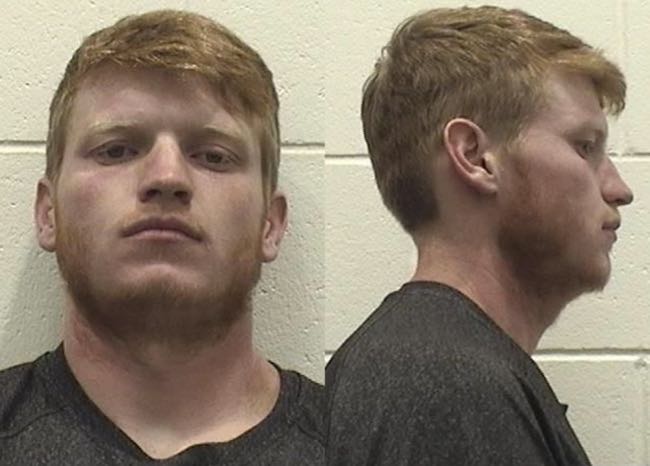 A 24-year-old North Georgia man was arrested after police say he yelled a slur at a gay man walking in downtown Athens and then physically attacked him.

Athens-Clarke County police arrested Chad Andrew Weaver (photo), who lives in Gainesville, about 2:30 a.m. on Saturday. Waver allegedly called Victor Alexander Suarez, a 20-year-old Athens resident, a “faggot” when he spotted him “dressed in female attire” and wearing makeup as he walked along West Clayton Street, according to a police incident report.

Suarez told police that he yelled back at Weaver and the two men argued. Then Weaver allegedly punched him in the face.

“A struggle ensued until it was broken up by other people,” according to the incident report.

A witness told police that he watched as Weaver yelled slurs and punched and shoved Suarez, according to the incident report. He said the fight lasted “not even for 15 seconds” and ended when he pulled Weaver – nearly a foot taller than Suarez – off his victim.

Police did not see any visible injuries on Suarez. Weaver suffered a cut finger, “which he said was caused by Alex biting him,” according to the incident report.

Weaver was arrested and charged with a misdemeanor charge of battery. He was booked into the Athens-Clarke County Jail at about 3:50 a.m. on Saturday. Weaver posted a $1,500 bond about an hour later, according to jail records.

But Weaver was held in jail until Tuesday when he was turned over to authorities in Lumpkin County for an outstanding bench warrant for failure to appear, according to jail records.

On Tuesday, Weaver launched a verbal tirade against Suarez and Athens police in a Facebook post. He called his victim “some over sensitive homo” who “got his ass handed to him and couldn't take it.”

Weaver added that he “reacted violently” after Suarez approached “me in a threatening manner.”

“I'm not the kind of man who is going to belittle someone just because they choose to be gay,” Weaver said in the post.

Then he accused a friend of the victim of stealing his wallet during the altercation and threatened to sue the police department over his arrest. 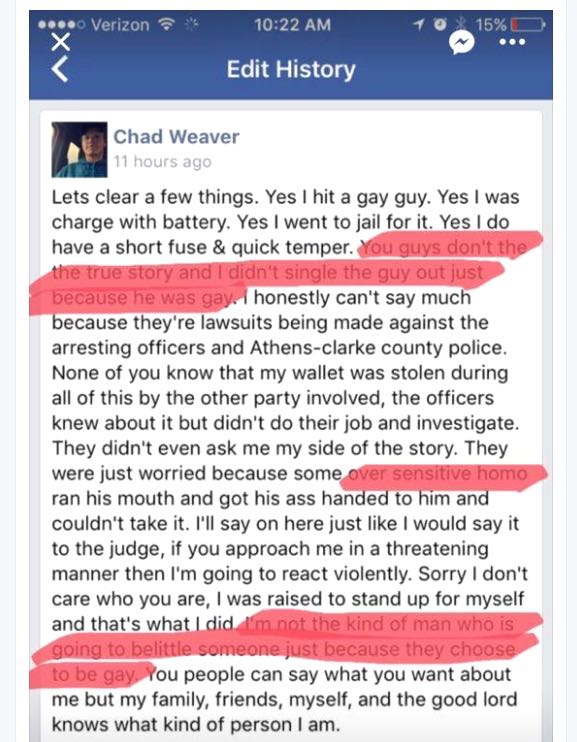