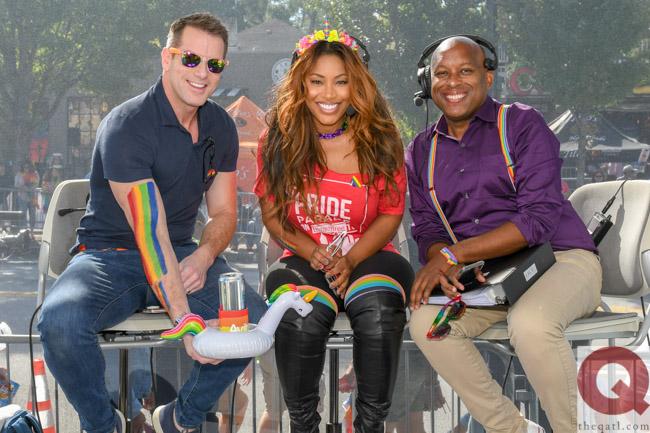 Out former MSNBC star Thomas Roberts is done as a CBS46 anchor after a 14-month-stint and one controversy.

Roberts’ (photo left) last day on air was Aug. 16, according to the AJC. He went on a two-week vacation after that.

“Sometimes things just aren’t the right fit,” Roberts said in an exclusive statement. “And there is nothing wrong with that. What matters is how it is handled. CBS46 is a class act and I have nothing but gratitude for how they handled my request.”

News director Steve Doerr sent a note to CBS46 staff on Sept. 1. calling Roberts “a great journalist” and saying the move was “a mutual, amicable decision,” according to the AJC.

Roberts was a splashy hire for CBS46 in July 2018. He told Project Q Atlanta at the time that he and his husband were excited to return to Atlanta after 11 years away.

But controversy found him that December when notes between he and then-co-anchor Sharon Reed (photo center) were leaked to TV news site FTVLive. Roberts referred to weatherman Paul Ossmann as “POS” in the notes, but he claimed it was a misunderstanding about how the initials used to refer to Ossmann in the teleprompter kept reminding him of “piece of shit.” Reed also referred to Ossmann as “White Dog” and “Kellogg.”

Ossmann left the station in April, and Reed left a few weeks later. Ossmann then sued CBS46 in July for “racially and ethnically discriminatory termination,” according to the AJC. CBS46 said they dismissed Ossmann because he made inappropriate statements to women. The lawsuit is pending.

He was busy on the LGBTQ scene during his latest stint here. He hit Swinging Richards with co-workers for an underwear auction in Sept. 2018, broadcast live from the Atlanta Pride parade in October and emceed the HRC dinner in May.

Roberts has not commented about his CBS46 departure on his social media accounts.